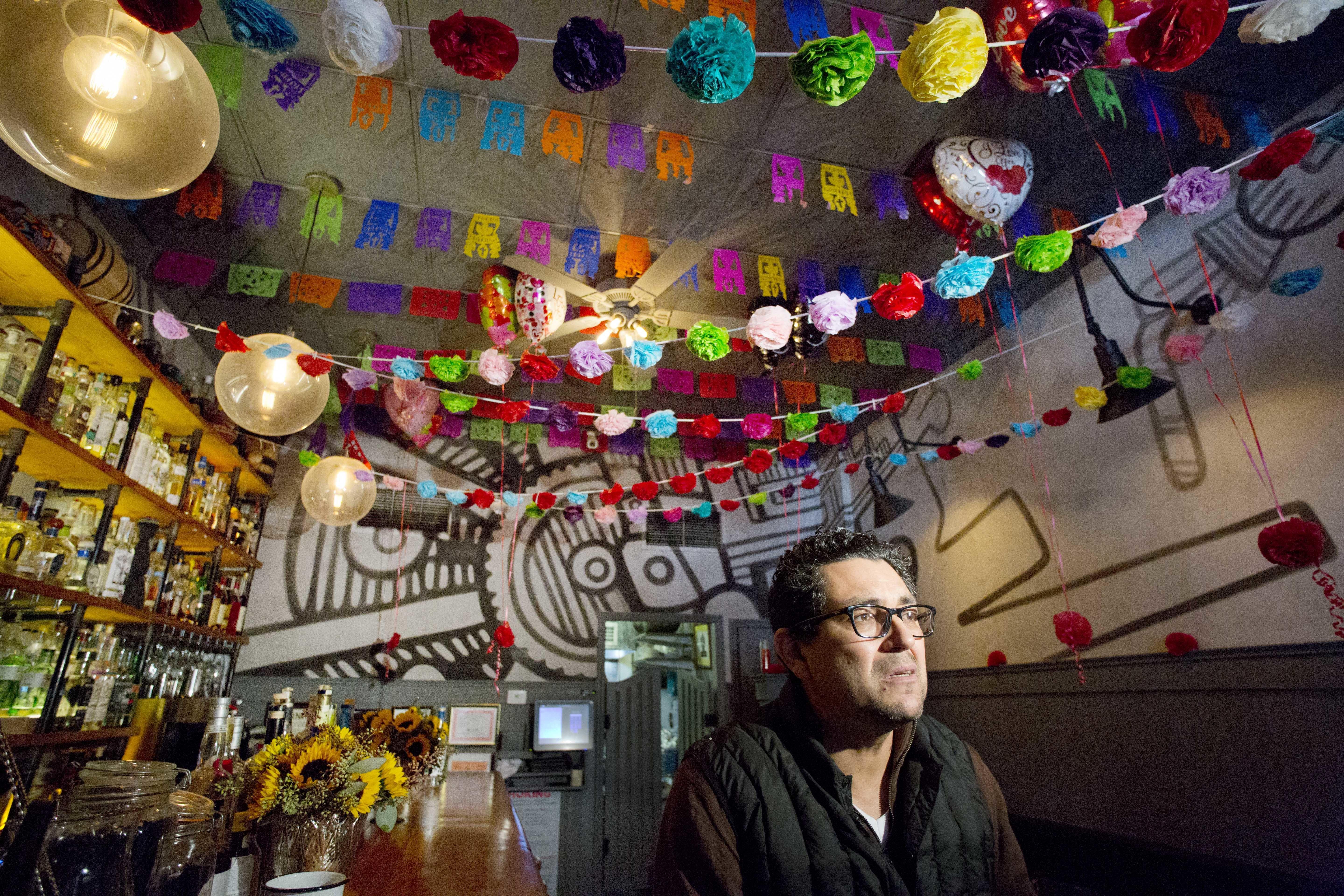 PHILADELPHIA -- The heart of Philadelphia’s Italian Market was uncommonly quiet. Fine restaurants in the nation’s capital and New York closed for the day. Grocery stores, food trucks and taco joints in places like Chicago and Boston shut down.

Immigrants around the U.S. stayed home from work and school Thursday to demonstrate how important they are to America’s economy and its way of life, and many businesses closed in solidarity, in a nationwide protest called A Day Without Immigrants.

The boycott was aimed squarely at President Donald Trump’s efforts to crack down on immigration, legal and illegal. Organizers said they expected thousands to participate or otherwise show their support.

Organizers appealed to immigrants from all walks of life to take part, but the effects were felt most strongly in the restaurant industry, which has long been a first step up the economic ladder for newcomers to America with its many jobs for cooks, dishwashers and servers. Restaurant owners with immigrant roots of their own were among those acting in solidarity with workers.

Expensive restaurants and fast-food joints alike closed, some perhaps because they had no choice, others because of what they said was sympathy for their immigrant employees. Sushi bars, Brazilian steakhouses, Mexican eateries and Thai and Italian restaurants all turned away lunchtime customers.

“The really important dynamic to note is this is not antagonistic, employee-against-employer,” said Janet Murguia, president of the Hispanic rights group National Council of La Raza. “This is employers and workers standing together, not in conflict.”

Among the well-known establishments that closed in solidarity were three of acclaimed chef Silvana Salcido Esparza’s restaurants in Phoenix; Michelin star RASA in San Francisco; and Washington’s Oyamel and Jaleo, run by chef Jose Andres.

At a White House news conference held as the lunch-hour protests unfolded, Trump boasted of his border security measures and immigration arrests of hundreds of people in the past week, saying, “We are saving lives every single day.”

Since the end of 2007, the number of foreign-born workers employed in the U.S. has climbed by nearly 3.1 million to 25.9 million; they account for 56 percent of the increase in U.S. employment over that period, according to the Labor Department.

Roughly 12 million people are employed in the restaurant industry, and immigrants make up the majority - up to 70 percent in places like New York and Chicago, according to the Restaurant Opportunities Centers United, which works to improve working conditions. An estimated 1.3 million in the industry are immigrants in the U.S. illegally, the group said.

Shea Frederick, who owns a small construction company in Baltimore, showed up at 7 a.m. at a home he is renovating and found that he was all alone, with a load of drywall ready for install. He soon understood why: His crew, five immigrants, called to say they weren’t coming to work. They were joining the protests.

“I had an entire day of full work,” he said. “I have inspectors lined up to inspect the place, and now they’re thrown off, and you do it the day before the weekend and it pushes things off even more. It sucks, but it’s understandable.”

Frederick said that while he fundamentally agrees with the action, and appreciates why his crew felt the need to participate, he feels his business is being made to suffer as a result of the president’s policies.

“It’s hurting the wrong people,” he said. “A gigantic part of this state didn’t vote this person in, and we’re paying for his terrible decisions.”

There were no immediate estimates of how many students stayed home in various cities. Many student absences may not be excused, and some people who skipped work will lose a day’s pay or perhaps even their jobs. But organizers and participants argued the cause was worth it.

In Washington, D.C., more than a hundred people gathered to march in acknowledgement of A Day Without Immigrants, CBS News’ Nicole Sganga reported. There were boisterous crowds, musicians, handmade drums, young kids, and large banners reading “they will not build borders in our community,” “immigrants work for America’s prosperity” and “We have a right to an education! To a future!”

Sapna Pandya, executive director of the grassroots, community-based organization Many Languages One Voice, helped organize the march, which started at the organization’s office in Columbia Heights.

The original call was to strike and stay home, she said.

“It’s also really important to delegitimize this administration because they are standing against so many of the values we hold dear, and the values many in this country hold dear.”

Maria Arellano, whose parents are from Mexico, was one of the protesters. She was born in the U.S. and became the first in her family to graduate from college.

“We are not bad people,” Arellano said.

”We just want to have a chance at the American dream,” she said.

Marcela Ardaya-Vargas, who is from Bolivia and now lives in Falls Church, Virginia, pulled her son out of school to take him to a march in Washington.

“When he asked why he wasn’t going to school, I told him because today he was going to learn about immigration,” she said, adding: “Our job as citizens is to unite with our brothers and sisters.”

The day of protests even reached into the U.S. Capitol, where a Senate coffee shop was among the eateries that were closed as employees did not show up at work.

The impact of the Day Without Immigrants actions were seen elsewhere across the country.

In South Philadelphia, it was so quiet in the morning on 9th Street in the area’s Italian Market that Rani Vasudeva thought it might be Monday, when many of the businesses on the normally bustling stretch are closed. Produce stands and other stalls along “Calle Nueve” -- as 9th Street is more commonly known for its abundance of Mexican-owned businesses -- stood empty, leaving customers to look elsewhere for fresh meat, bread, fruits and vegetables.

“It’s actually very sad,” said Vasudeva, a 38-year-old professor at Temple University. “You realize the impact the immigrant community has. We need each other for our daily lives.”

There were signs on businesses reminding patrons why they were closed, CBS Philadelphia reported.

In New Orleans’ Mid-City neighborhood, whose Latino population swelled after the damage wrought by Hurricane Katrina in 2005 created lots of jobs for construction workers, the Ideal Market was closed. The place is usually busy at midday with people lining up at the steam tables for hot lunches or picking from an array of fresh Central American vegetables and fruits.

In Chicago, Pete’s Fresh Market closed five of its 12 grocery stores and assured employees they would not be penalized for skipping the day, according to owner Vanessa Dremonas, whose Greek-immigrant father started the company.

“It’s in his DNA to help immigrants,” she said. “We’ve supported immigrants from the beginning.”

Carmen Solis, a Mexico-born U.S. citizen, took the day off from work in Chicago as a project manager and brought her two children to a rally.

“I feel like our community is going to be racially profiled and harassed,” she said of Trump’s immigration policies. “It’s very upsetting. People like to take out their anger on the immigrants, but employers are making profits off of them. “

In the Bay Area, several businesses closed their doors Thursday, CBS San Francisco reported. Chavez Supermarket decided to close all 10 of its Bay Area locations for the day, while the owners of Gazzali’s Supermarket closed all five of their Oakland stores.
A number of restaurants big and small were staying closed: Miss Ollies and Cosecha in Oakland, Saffron in San Carlos, and La Michoacana ice cream in Sonoma Valley and Novato.

Cory McCollow, who owns Nido Restaurant in Oakland with his wife Silvia, said, “Nido is what Nido is because of our staff and they are mostly immigrants.”

“Silvia is a first generation American from a family of immigrants, and we felt that one day of not being open, not having revenue paled in comparison to the importance of making a statement and standing behind all of our staff,” McCollow said.

Sebastopol Road in Santa Rosa is the epicenter of Latino businesses in California’s Sonoma County. Marcos Suarez, diversity program manager of the Sonoma County Economic Development Board, detailed the closures there.

“Pretty much all of the businesses there are closing. Camacho’s Market, La Texanita, the food trucks,” Suarez said. “Lola’s Market, they have seven locations throughout Sonoma County, and they’re one of the biggest. It really was a snowball effect, everybody got behind this movement.”

Back in Washington, Tony and Marie Caschera, both 66, who were visiting the city from Halfmoon, New York, thought a tapas restaurant looked interesting for lunch, but then realized the lights were off and the place was closed.

“I’m in support of what they’re trying to say,” said Marie Caschera, a registered Democrat, adding that immigrants are “fearful for their communities.”

Her husband, a registered Republican whose family emigrated from Italy before World War II, said he supports legal immigration, but added: “I don’t like illegal aliens here.”