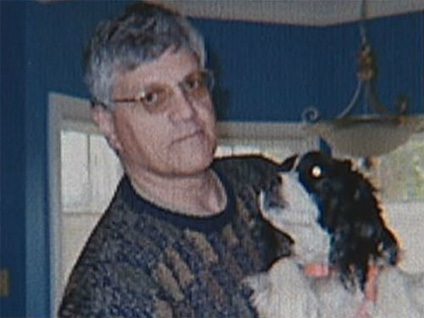 (CBS/AP) FITZGERALD, Ga. - Crews in helicopters, airplanes and on foot resumed their search of a heavily wooded area Monday in south Georgia for a hot air balloon pilot who disappeared after his craft was engulfed by a thunderstorm and sucked into the clouds.

About 50 to 75 people were searching an area roughly 12 to 15 square miles of terrain, Ben Hill County Sheriff Bobby McLemore told The Associated Press.

Edward Ristaino, 63, of Cornelius, N.C., was taking five skydivers into the air Friday night during a festival in Fitzgerald, Ga., when a storm struck, McLemore said.

The storm "came out of nowhere," said skydiver Jessica Wesnofske of Cornelia, Ga.. She said Ristaino saved their lives.

Ristaino kept them safe, two skydivers said, by spotting a field where they could safely parachute and telling them to jump as the storm approached. None of them was injured.

With the skydivers out of the balloon, the craft became lighter and more difficult to land, as an updraft pulled the balloon up to 17,000 to 18,000 feet into the clouds.

The pilot also maintained walkie-talkie communication with his ground crew as he plummeted toward the ground, the sheriff said.

"He had just made the statement that I'm at 2,000 feet and I see trees and that was his last transmission."

Now, searchers are using radar imagery of the storm at the time and studying weather patterns to help them determine where he might have touched down.

"We're dealing with a storm here with a lot of cross currents at different altitudes, so that's why the area is so large," McLemore said.

"We're looking at weather patterns, wind direction," he said. "It was a rather large storm and when he went into the clouds, he was pulled right into the storm."

Searchers believe the balloon had collapsed above Ristaino, making it a challenge to spot it on the ground.

"It wasn't nothing but a streamer when it came down and it's going to be a very small object to be looking for," McLemore said.

According to CBS Affiliate WBTV, Ristaino, of Cornelius, N.C., is a medical professional who often travels to hot air balloons events. He also founded the Lake Norman Balloon Co. in Cornelius.

Neighbors told WBTV that Ristaino is a skilled flier and they were shocked to hear of the accident.

One neighbor said Ristaino would even put up a balloon in the front yard and take flight from his Cornelius home.