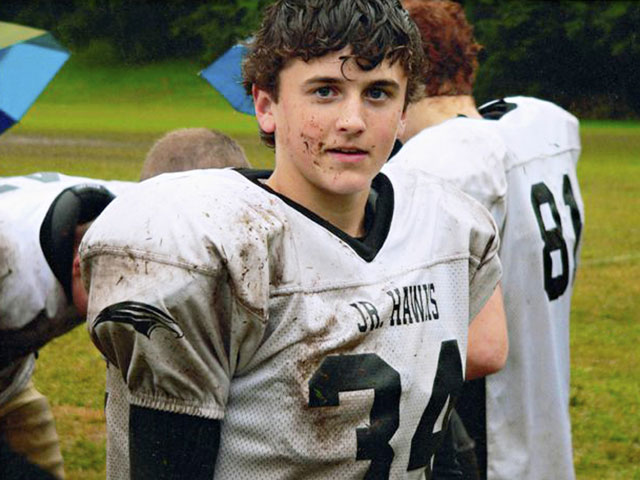 HARTFORD, Conn. (CBS/AP) David Weaving, who is serving a manslaughter sentence for striking and killing a 14-year-old boy with his car, is suing the victim's parents, accusing them of being responsible for their son's death because they allowed the boy to ride his bike in the street without a helmet.

Weaving was carelessly passing another car at about 83 mph in a 45-mph zone when his car struck Matthew Kenney in the Waterbury suburb of Prospect, about 30 miles outside of Hartford, Conn., on April, 27, 2007.

Kenney suffered severe head and internal injuries, broken bones and lacerations. He was declared brain dead the next day.

A jury convicted Weaving of manslaughter and other charges in December 2008 and he was sentenced to 10 years in prison.

Shortly after Weaving was sentenced last year, Kenney's parents, Stephen and Joanne, filed a lawsuit against the 48-year-old in Waterbury Superior Court, accusing him of negligence and seeking more than $15,000 in damages.

Weaving, who has a history of drunken driving convictions, responded months later with a handwritten countersuit accusing the Kenneys of "contributory negligence." He's also seeking more than $15,000 in damages, claiming he has endured "great mental and emotional pain and suffering," wrongful conviction and imprisonment, and the loss of his "capacity to carry on in life's activities."

Weaving claims he was driving the speed limit the day the accident occurred and wasn't acting recklessly when he passed another car in a legal passing zone, and said the teen suddenly appeared in the road around dusk in wet, foggy conditions. He alleges that the boy and some of his friends were jumping their bicycles off a ramp at the end of a friend's driveway and landing in the middle of the two-lane road.

In his lawsuit, Weaving wrote that had the Kenneys "complied with the responsibilities of a parent and guardian and the laws of this state and not allowed their son to ride his bicycle without a helmet and play out in the middle of Rt. 69...this incident and Matthew's death would not have happened."

"I just think it's crazy that they have the ability to do this behind bars," she said. "I think inmates have too many rights. They're the ones who committed the crimes, not us. And we're the ones who suffer more."

It's not often that perpetrators sue victims, said Jeff Dion, director of the nonprofit National Crime Victim Bar Association. According to Dion, its database indicates that out of more than 12,000 civil cases dating back to the 1980s, approximately 485 cases are ones in which perpetrators actually sue victims.

While the Kenneys are paying an undisclosed amount in attorneys fees, Weaving is filing his claims for free because he's considered indigent; a judge has waived $500 in fees so far.

Matthew Kenney was a popular student at Long River Middle School, located just a few miles from the site of the accident.

"He was a loving kid," Joanne Kenney told The Associated Press. "He was a caring kid. He was a helping kid. He was an honors student. He played sports. He was full of life. He had so much to give."