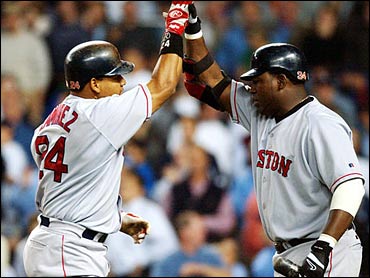 NEW YORK (CBS/AP) David Ortiz, the Boston Red Sox slugger who had never hit more than 20 home runs in a season before 2003, but suddenly jumped to fourty plus homers the next three years, was shocked to find out that he had become the latest star implicated in baseball's ever-growing drug scandal.

Shortly after hitting the go-ahead home run that beat Oakland 8-5, Ortiz responded to a story on The New York Times' Web site that he and former teammate Manny Ramirez tested positive for performance-enhancing drugs six years ago.

"I've just been told that the report is true," Ortiz said in a statement after contacting the union. "Based on the way I lived my life I'm surprised to learn I tested positive."

The popular Big Papi, who had never been linked to drugs, said he intended to find out what was in his system and would tell the Red Sox and the public.

"You know me - I will not hide and I will not make excuses," he said.

Alex Rodriguez, Barry Bonds, Roger Clemens and Sammy Sosa are among the many All-Stars tainted by the cloud of steroids and drugs, which has called into question some of the sport's greatest achievements over the last two decades.

Ortiz and Ramirez led the Red Sox to the World Series title in 2004 - their first in 86 years - and another championship in 2007.

Ramirez, now with the Los Angeles Dodgers, recently served a 50-game suspension for violating baseball's drug policy. Asked about this second alleged doping violation, he told reporters in St. Louis: "You want more information, I'm pretty sure you guys got the phone number to the union. Call the union, and they can explain that to you guys."

Red Sox manager Terry Francona, who guided Boston to those two titles, said the news "blindsided everybody," including Ortiz.

"Nobody condones the use of performance-enhancing drugs ... the testing procedure was confidential. I don't know how you can go back on that now," he said.

In 2003, 104 major leaguers tested positive for performance-enhancing drugs; the results were supposed to be anonymous and are now under court seal.

"Precisely for that reason, the Players Association will not, indeed cannot, comment on whether the information is accurate," union leader Donald Fehr said.

The Times' story cited lawyers involved in pending litigation over the testing results who spoke anonymously because the information is under seal. The newspaper did not say what the players tested positive for.

"Can somebody in baseball - we're all begging, people — get that stupid list out and move on," Chicago White Sox manager Ozzie Guillen said. "This is ridiculous; this is embarrassing; this is a joke. Whoever is there is there, get them out, and that's it."

As for Ortiz, "too bad for him, too bad for baseball. Too bad for both," New York Yankees star Derek Jeter said.

"I'm sad for everyone. Once again, we're sitting here talking about this again."

There were no penalties for a positive test in 2003 - the anonymous tests were conducted to determine if it was necessary to impose mandatory random drug testing across the major leagues in 2004. But federal agents seized the results as part of the BALCO investigation. The union has argued the search was illegal, and the case is currently before the 9th U.S. Circuit Court of Appeals.

In the meantime, the names on the list keep coming out one by one.

In June, the Times reported Sosa also was on the 2003 list, and Rodriguez admitted using performance-enhancing drugs after he was linked to the 2003 list earlier this year.

Asked about this latest report involving Ortiz, Rodriguez said, "Well, he's my friend, and I care for David."

"I have nothing else to say about that," the Yankees star said. "No, I'm not talking about it."

Major League Baseball declined to comment on the Times' report, telling The Associated Press it didn't have the list of players who tested positive in 2003. Red Sox owner John Henry did not immediately respond to an e-mail seeking comment.

Try as it might, baseball has not been able to escape the drug stain.

"We're just trying to move on and play the game, and play it clean, play it the right way, Texas pitcher Kevin Millwood said. "And this cloud keeps looming over. And when these names keep leaking out, it just builds this whole thing back up again."

The news revived an ongoing debate - should all 104 names be revealed?

Said Atlanta star Chipper Jones: "It's like somebody wants to keep this on the tips of everybody's tongues. And if that's the case, I'd rather we just got it over with."

Yankees outfielder Johnny Damon played with Ortiz and Ramirez on those championship Red Sox teams. Will fans think those Boston clubs were full of steroid users?

"That probably is what being said, and that's what makes guys like me upset," Damon said.

Ramirez was a long-established star in 2003. Ortiz, in contrast, had been a part-time player before that season.

Ortiz had never hit more than 20 homers in a season as a part-time player in Minnesota early in his career. He came to Boston as a platoon player in 2003 and had four homers by July 1, then hit 27 the rest of the year.

Ortiz followed up with seasons of 41, 47 and 54 home runs as he stamped himself as one of the best sluggers in the game.

Last year, he dipped to 23 home runs, and his slump continued this season. He's hitting only .228 with 14 homers.

Ramirez returned from his suspension this month and quickly re-established his presence in the middle of the lineup for the NL West-leading Dodgers.

Boos have rained down on Ramirez throughout this week's series in St. Louis whenever he comes to the plate or touches the ball.

"He's a great player, and I don't think the suspension has anything to do with it," Dodgers manager Joe Torre said. "Personally, if he never got suspended they'd still be booing the hell out of him."