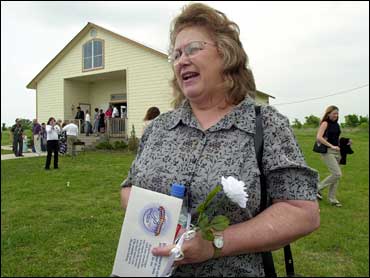 The mother of infamous Branch Davidian sect leader David Koresh has been stabbed to death, and Koresh's aunt was in custody on a murder charge Saturday.

Bonnie Clark Haldeman, 64, was found Friday afternoon at the home of her sister, Beverly Clark, in a rural area near Chandler, Henderson County Sheriff Ray Nutt said. Chandler is about 175 miles north of Houston.

"It's still under investigation, and we really don't know what the motive was or what caused this to happen," Nutt said Saturday.

He said deputies were called to the home Friday and the two women were the only people in the house when deputies arrived. A knife believed to be the murder weapon was found.

Clark, 54, was being held without bail pending a court appearance. Jail officials said she did not yet have an attorney to speak for her.

In 1993, agents of the federal Bureau of Alcohol, Tobacco and Firearms tried to arrest Koresh for allegedly stockpiling weapons and explosives at the Branch Davidians' ranch compound outside Waco.

The confrontation led to a 51-day standoff that ended when the complex caught fire and burned to the ground on April 19, 1993, killing Koresh and nearly 80 of his followers.

About two dozen children were among the victims.

The government claimed the Davidians committed suicide by setting the fire and shooting themselves. Survivors said the blaze was started by tear gas rounds fired into the compound. A 10-month independent investigation concluded in 2000 that Koresh was solely to blame.

At the compound's remains on the 10-year anniversary, Haldeman said the federal raid was unnecessary because her son would have surrendered if the local sheriff had served the arrest warrant.

"This was a harmless bunch of people," Haldeman said in 2003. "(A misperception) is that he was anti-government, collecting guns to kill people. That was an absolute falsehood. David didn't have a mean bone in his body. David did not believe in murder."