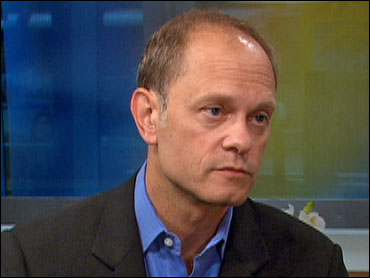 Best-known for his character, Dr. Niles Crane, on the TV sitcom "Frasier," Pierce's father and grandfather died after battling the illness.

Pierce, a national board member of the Alzheimer's Association, told Early Show co-anchor Maggie Rodriguez Tuesday, "My family has been touched with Alzheimer's disease, which was terrible, but it also gave me an insight into how bad it is and how important it is that we fight it.

"The thing that we experienced that all families experience with Alzheimer's is that, as terrible as it is that you lose someone to this disease -- it's a terminal illness that ultimately kills a person -- it has such a devastating effect on the family, on the spouse or partner or whatever, because you're on 24-hour duty. You're dealing with a person who is not only dying, but also losing their ability to take care of themselves or know where they are, have good judgment. So, your responsibility is either you have to be there all the time with them, or you have to spend your money to hire someone to be there all the time with them. And it is so debilitating. And the statistics of illness and even mortality for care-givers are huge with this disease. So, it really cuts a wide swath. A lot of collateral damage, we say."

Pierce explained that, "My grandfather was the first to get it and really, for me, I was distanced enough, it was my grandmother who was really taking care of him, and it was only after my grandfather went into a nursing home that we really saw how much she had been doing.

"And the same thing sort of happened with my dad. My dad had dementia, which was probably Alzheimer's, and my mom was really taking care of him, and it wasn't until she was ill that we saw how far along he had gotten. And the burden passed from her to my brother, who took care of him in his home for awhile. Then he went to an assisted living place. And it affects -- we think of it as a disease that affects older people, and in many ways it does, but the chain reaction goes right down to the youngest kid in terms of their being affected."

Do people with Alzheimer's understand what is happening to them?

"Yes," Pierce said. "One of the great things we now can do is, we've been able to diagnose it earlier, which means people are much more aware and functioning when they know they have this disease, which is good, because it allows them to make plans, make decisions with their families about what's going to happen in the future. So, yeah, for a long time, people know exactly what's happening."

"Sept. 21 is being honored as World Alzheimer's Day," Pierce continued. "The Alzheimer's Association has set up a Web site where people can go and they can ... find out information about the disease, you can find out ways to help, ways to get your community organizations involved, and you can even make a donation. The board of the Alzheimer's Association is going to match any donations made now until end of September, up to, like, $250,000 or something.

"We're trying to focus awareness, especially now, in an election year, when health care is such an important issue. And Alzheimer's is a critical component of any health care decisions we make, because it has such a wide effect on business, on families, on, you know, people on -- on the economy, even.

"So this is our chance to tee it up, so to speak, get people to be aware of it, to make a contribution if they can. And also, for people who are worried about it to go to the Alzheimer's Association and find out more about it and find out what they can do either to help people who have it or to get help themselves."