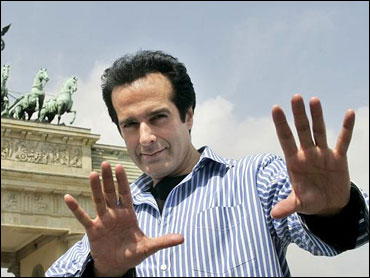 After his show at a West Palm Beach performing arts center Sunday Copperfield was walking with two female assistants back to their tour bus when four teenagers pulled up in a black car.

Two armed robbers got out of the car demanding the group's belongings. One assistant handed over $400 from her pockets while the other gave up her purse. containing $100, her passport, plane tickets and a cellphone.

Copperfield, however, says he turned his pockets inside out to reveal nothing in them, even though he was carrying his passport,wallet and cell phone.

When the robbers left in the car Copperfield read the license plate number to an assistant while she called 911.

Four teenagers were arrested shortly thereafter, and the assistants' belongings were recovered. They were charged with armed robbery and are being held without bond.