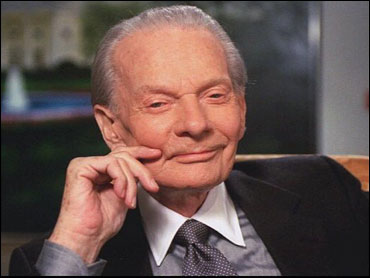 David Brinkley, who first gained fame as one-half of NBC's Huntley-Brinkley anchor team and for more than a half-century loomed large in the newscasting world he helped chart, has died at the age of 82.

Brinkley died Wednesday night at his home in Houston of complications from a fall, ABC News said Thursday.

During his career, which in recent years took him to ABC, Brinkley won 10 Emmy awards, three George Foster Peabody Awards and, in 1992, the Presidential Medal of Freedom, the nation's highest civilian honor.

"David Brinkley was one of the most influential and respected figures of the early television news age. His signature was crisp writing and a distinctive clipped delivery. At least two generations of broadcast journalists, especially those at NBC, honored him by trying to emulate his style," said CBS News anchor Dan Rather.

Former President Bush called him "the elder statesman of broadcast journalism." But Brinkley spoke of himself in less grandiose terms.

"Most of my life," he said in a 1992 interview, "I've simply been a reporter covering things, and writing and talking about it."

"David was a good friend and a fierce competitor with his famously dry wit and deep wisdom," said former CBS News anchor Walter Cronkite. "I knew him, as did the public, to be a well-informed, intelligent news reporter and commentator. He's been missed since his retirement from ABC, and it is difficult to believe that we will never again hear his distinctive voice giving us his humorous view of our complicated world."

Brinkley stepped down as host of ABC's "This Week with David Brinkley" in November 1996 but continued to do commentaries. He left amid a rare controversy, and an apology: Late on Election Night, after a long evening, he had said unkind things about President Clinton on the air, including calling him a "bore."

Clinton sat for an interview for Brinkley's last show anyway, and after Brinkley apologized, told him: "I always believe you have to judge people on their whole work, and if you get judged based on your whole work, you come out way ahead."

Based in Washington and focusing on politics, Brinkley was known for his gentlemanly manner, wry wit and, as the Clinton incident illustrated, occasional suffer-no-fools bluntness. Playing against such refinement were a boyish appearance and a jerky style of delivery that suggested a mild case of hiccups.

"If I was to start today I probably couldn't get a job," Brinkley once said, "because I don't look like what people think an anchorperson should look like."

Perhaps not. But in 1956, his distinctive presence was paired with craggy, leading-man-handsome Chet Huntley for NBC News' coverage of the Democratic and Republican national conventions. It was a perfect fit.

Following that success, the two took over NBC's nightly newscast, with Huntley in New York and Brinkley in Washington. The program, at first only 15 minutes long, switched back and forth between them.

Beyond that regular report, Huntley and Brinkley led NBC as it interrupted regular programming to cover space shots, assassinations, riots and other breaking news with a thoroughness summed up by the unofficial byword "CBS plus 30 (minutes)."

Their fame extended far beyond the realm of journalism. A consumer-research company found in 1965 that these co-anchors were recognized by more adult Americans than were John Wayne or the Beatles. Despite their mutual disdain for it, their "Huntley-Brinkley Report" signoff — "Goodnight, Chet"; "Goodnight, David" — became part of pop culture.

Then in 1970, Huntley retired. He died four years later.

Brinkley co-anchored the renamed "NBC Nightly News" with John Chancellor, then became the program's commentator. But the spell was broken. "The CBS Evening News with Walter Cronkite" had taken the ratings lead, and NBC News had stumbled.

Entering his 60s, Brinkley in 1981 began the second act of his career by exiting the organization he had joined 38 years earlier.

He lent his heavyweight status to ABC News, a late bloomer then on the way up. There he flourished, particularly on "This Week with David Brinkley," a Sunday morning interview and discussion program.

"This Week" had a free-wheeling format in which Brinkley took great delight.

"I think he had the combination of substance and style, said ABC's Sam Donaldson. "I know a lot of my colleagues who are very deep and substantive but they're dull and David was never dull. You wanted to watch him. You liked him and when you did watch him you got a lot of substance from a story."

Despite having been present for the creation of TV news, Brinkley insisted "I didn't create anything. I just got here early."

Born in Wilmington, N.C., on July 20, 1920, Brinkley was still in high school when he began writing for his hometown newspaper. He was educated at the University of North Carolina and Vanderbilt University, and after Army service he worked in Southern bureaus for the United Press syndicate.

He moved to Washington, D.C., thinking a radio job awaited him at CBS News. Instead, he had landed a job four blocks away at NBC News. He became White House correspondent — NBC's first.

Not long after that, as Brinkley recounted in his 1995 memoir, "a large, odd-looking object arrived at the Washington studio ..., so big it could barely be rolled through the door. It was our first television camera."

Brinkley was divorced from his first wife, Ann, in the 1960s and married Susan Benfer in 1972.

Among his four children, Alan is an American Book Award-winning historian and Joel is a Pulitzer Prize-winning journalist.

The author of three books, Brinkley aptly summed up his career and life in the subtitle of his memoir: "11 Presidents, 4 Wars, 22 Political Conventions, 1 Moon Landing, 3 Assassinations, 2,000 Weeks of News and Other Stuff on Television, and 18 Years of Growing Up in North Carolina."

Brinkley retired from ABC in 1996, ending his broadcast as he so often did -- with a few words perfectly timed, and with a gentleman's grace.

"On this, my last words here on ABC, I quote Shakespeare, who said, All's well that ends well.' My time here now ends extremely well. Thank you," he said.