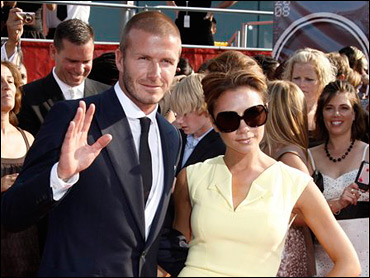 The company says in a statement the allegations in the weekly In Touch are "completely untrue and totally ridiculous as the magazine was clearly told before publication.

"Sadly we live in a world where a magazine can print lies and believe they can get away with it. We are taking legal action against the magazine," the statement said.

Beckham has been married for 11 years to former Spice Girl singer Victoria Beckham. The couple have three sons.

The former Manchester United and Real Madrid midfielder plays for the Los Angeles Galaxy of the MLS.

The magazine quotes a 26-year-old woman, identified as Irma Nici, as saying she was a prostitute who slept with Beckham five times in 2007. She claims he also slept with a second prostitute.