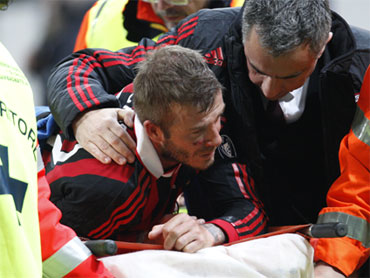 David Beckham is eligible to play in the Los Angeles Galaxy's home MLS game against Columbus on Saturday after being out for almost six months with an Achilles' tendon injury.

Beckham tore his left tendon on March 14 while playing on loan with AC Milan, undergoing surgery two days later on an injury that prevented him from playing in the World Cup.

After traveling with the Englan team in South Africa, Beckham returned to practice with the Galaxy on Aug. 10, gradually increasing his training regimen over the past four weeks.

After leading Los Angeles to the MLS Cup final last November, Beckham hasn't played this season for the Galaxy, who still lead the Western Conference with 44 points and field U.S. internationals Landon Donovan and Edson Buddle.

Beckham has seven goals in 41 career regular-season games with Los Angeles. He played just 11 games for the Galaxy last year after spending the first half of the season with Milan.