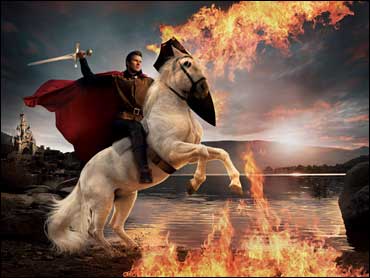 Soccer king David Beckham plays a prince in a new Disney campaign — his first showpiece endorsement since announcing his move to Los Angeles.

Beckham was one of the celebrities photographed last month in the roles of Disney movie characters for a "Year of a Million Dreams" promotion for Walt Disney Co. theme parks.

The international soccer star, marketing giant and fashion icon was photographed as the prince from "Sleeping Beauty," astride a white horse and fighting a fire-breathing dragon.

"There were many Disney characters I liked as a kid," Beckham said in a statement released by Disney on Friday.

"Now my sons love the Disney characters and it's a big part of their lives, a big part of many children's lives around the world. So to be part of that is an honor and very exciting," he said.

The photo, shot at a lake near Madrid by famed photographer Annie Leibovitz, will appear in magazines like Vanity Fair and Vogue in March.

The 31-year-old midfielder with Real Madrid signed a five-year deal on Jan. 11 with Major League Soccer's Los Angeles Galaxy and will join the club this summer. His wife, former Spice Girl Victoria, has been spotted house-hunting in Southern California.

Other photos for the Disney campaign feature singer-actress Beyonce Knowles as Alice in Wonderland and actress Scarlett Johansson as Cinderella, wearing a custom-designed Nicoletta Santoro gown and a 62-carat diamond-and platinum tiara by Harry Winston valued at $325,000.

The celebrities got to help decide which characters they would portray and Beckham liked the idea of "a hero role," Wardle said.

"David loved the sword and the horse," he added.

"Each of the celebrities had fun dressing up," he said. "Disney allows you to become a child again. ... These guys had permission for the day and I think they thoroughly enjoyed it."