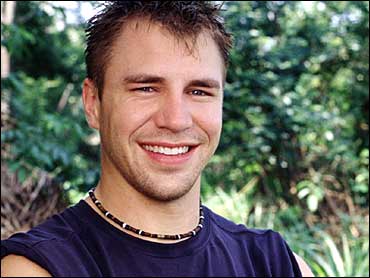 Matthew Von Ertfelda, the restaurant designer, gave off weird vibes to the rest of his tribe, but it was Dave Johnson, 24, who presented the greatest challenge to the other Survivors, and this garnered him a vote off the island.

The women bonded on "Survivor: The Amazon" and have, with Rob, created an unpenetrable voting bloc. Even Dave was trying to beg his way into a sympathy vote with the alliance after he had formed a faulty relationship with Roger who was voted off last week.

In the first challenge, tribe members were playing for a refreshing afternoon of a soothing bath and mounds of ice cream and toppings. Dave won the challenge, which involved players tied with rubber bands and stretching to retrieve a series of flags. Deena was chosen to go along to enjoy the afternoon.

When they returned to camp, there was some tension among the other Survivors because Deena and Dave were both exclaiming about how hungry there were even though they had just chowed down on dessert.

Heidi Strobel and Jenna bathed each other, leading Rob, as he happily watched on, to wonder whether they were using their sexuality to manipulate their fellow "Survivor" contestants.

At the immunity challenge, each tribe member decorated his or her own mask which was hung in front of a hammer that would smash it if the rope was chopped three times. Each Survivor was armed with a machete and if they answered trivia questions about Amazon culture correctly, they could chop a section of someone else's rope. Matthew and Dave were the first two out of the game, followed quickly by Rob, Butch and Alex. This left the four women vying against each other for immunity.

At the end, Jenna was the winner of the immunity necklace.

Back at camp, Dave was essentially begging for sympathy votes from Alex and Heidi. The latter assured him that he had a 50-50 chance against Matthew, but this proved untrue at Tribal Council. At the final vote, it became clear that everyone had voted off Dave except for Dave himself.

Deena watched him go with a smug smile.