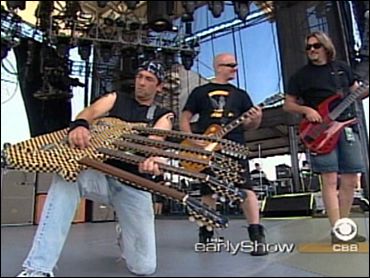 Last Saturday night, The Early Show's Dave Price sold his soul to rock 'n' roll. The following is his report:


I get to do a lot of crazy things in this job, but this one takes the cake: Aerosmith, one of the greatest bands that ever played a stadium, let me be a roadie for one brutal day and one incredible night.

With or without my help, the crew has exactly 12 hours to turn an empty stage into a rock 'n' roll dream.

The traffic from New York was murder, but when I walked in a half-hour late, Charlie was very understanding, sort of.

"You're so late," Charlie said. "The rule is, I don't care if you catch fire the day before as long as you're smoldering on the loading dock at call time. Go with Doug and he'll get you started."

And to make matters worse, I got injured in the first 30 seconds. I got a splinter by pushing the cart.

I found out pretty quickly that rock 'n' roll is a labor of love, heavy on the labor.

Geroge, one of the guys, told me, "When road guys speak to each other, the big bravado phrase is: 'How many trucks you got?'"

"We got 12 53-foot tractor trailers full of gear top to bottom," George said.

And I helped unload almost every one of them.

Unloading one of these trucks is like working out in the gym for two weeks straight. "Stay hydrated," I reminded myself as I drank some water.

So you wonder what all that equipment looks like when it's out of the trucks and on stage? We got to that point but, in a little while, Aerosmith would be on stage and all the equipment would be up, hanging from the ceiling.

In the meantime, I found a bra. A roadie told me it was from one of the shows. (This is support from fans like I've never seen before.)

Within six hours, everything was ready, except for a few tiny details. I took care of such things as the mike check and trying out the drums. But I guess others didn't appreciate my music.

It was amazing, but I still looked like a weatherman. So I found out from a makeup artist what I needed to do to look like a roadie.

As she drew with a marker on my arm, she said, "We need to get you tattooed, rip off these sleeves, dirty up your hands, do rag."

Not only did I look the part, I could really feel it.

And I was back onstage, warming up, playing all sorts of instruments.

All we needed was the crowd, and the band. And as they got out of their car, their wish was literally my command.

Finally, it was show time. I couldn't believe what was happening.
I gave Steven Tyler the high five.

I guess I really did a good job as a roadie, because I was living my own rock 'n' roll dream. I entered with maracas. I was playing with Aerosmith. It doesn't get any better than this.

The thrill, however, did not last long. I was later escorted out by Charlie.

It didn't have to end that way. I don't know what happened at the end, because I was really in some sort of groove.

It's clearly some horrible miscommunication.