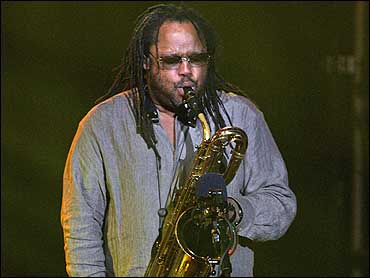 Dave Matthews Band saxophone player LeRoi Moore, one of the group's founding members and a key part of its eclectic jazz-infused sound, died Tuesday from sudden complications stemming from injuries he suffered in an all-terrain vehicle accident in June. He was 46.

Moore died at Hollywood Presbyterian Medical Center, according to a statement released on the band's Web site. The statement did not specify what led to his death.

Moore was initially hospitalized in late June after the accident on his farm outside Charlottesville, Va. He was later discharged and had recently returned to his Los Angeles home to begin a physical rehabilitation program when complications forced him back to the hospital on July 17, the band said.

Galina Shinder, a nursing supervisor at Hollywood Presbyterian, said the hospital could not release any details.

Ambrosia Healy, the band's publicist, said the band's show Tuesday night in Los Angeles was not canceled. Saxophonist Jeff Coffin, who played with Bela Fleck and the Flecktones, had been sitting in for Moore during the band's summer tour.

Moore, who liked to wear his trademark dark sunglasses at the band's live concerts, had classical training but said jazz was his main musical influence, according to a biography on the band's Web site.

"But at this stage I don't really consider myself a jazz musician," Moore said in the biography. Playing with the Dave Matthews Band was "almost better than a jazz gig," he said. "I have plenty of space to improvise, to try new ideas."

The band formed in 1991 in Charlottesville, Va., when Matthews was working as a bartender. He gave a demo tape of his songs to Moore, who liked what he heard and recruited his friend and fellow jazzman Carter Beauford to play drums, and other musicians.

The group broke out of the local music scene with the album "Under the Table and Dreaming." The band won a Grammy Award in 1997 for its hit song "So Much to Say" off its second album "Crash." Other hits include "What Would You Say," "Crash Into Me" and "Satellite."