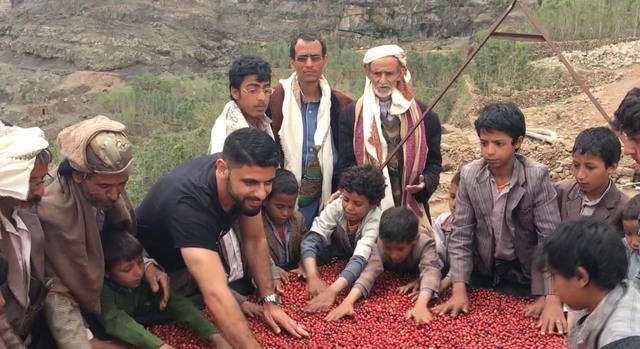 Mokhtar Alkhanshali was 24 and working as a doorman at a San Francisco high-rise when he got a delirious idea: leave the Bay Area for Yemen and start a coffee business. What he didn't plan on was getting trapped in the middle of a civil war. It was a story Dave Eggers felt compelled to tell.

"I'm always attracted to stories of self-invention and entrepreneurship and self-creation," Eggers told CBS News' Jeff Glor. "Nobody dreams the American dream better than immigrants and the sons and daughters of immigrants."

Alkhanshali's journey is documented by Eggers in "The Monk of Mokha." The port city, Mokha, on the Red Sea, is where the first-ever coffee beans were exported in the 15th century.

"The amount of pluck and just – Mokhtar calls it naive arrogance – that goes into sort of starting a business from scratch. Going to Yemen, not knowing anything about coffee cultivation and creating a business. And rallying and organizing all these farmers around a new idea of a new way of life. ... It was just incredibly inspiring," Eggers said.

Alkhanshali thinks his lack of knowledge actually helped him.

"In the early days I had these SWOT diagrams I would write up, strength, weaknesses, opportunities and threats. So under threats I had things like al Qaeda, pirates, political instability," he said. Laughing, Eggers added, "Standard for any startup, you know, Algerian pirates."

"Looking back at these reports I wrote myself I'm like, 'what was I thinking'?" Alkhanshali said. "The pro-side, it was building a bridge between two worlds."

Eggers is known for telling personal stories, including his own. His first book, "A Heartbreaking Work of Staggering Genius," was a memoir about raising his younger brother after losing both parents to cancer. It went to No. 1 on The New York Times best sellers list. For this book, Eggers spent years listening to Alkhanshali's story, traveling with him from California to Africa.

"Your story's the most personal asset that you have," he said. "And I couldn't have done it with anyone else. To be able to be that vulnerable, Dave is someone who's very caring and very loving and that made it much easier to do because some of the parts of the book are really hilarious but others we had a lot of tissue paper."

During one trip to Yemen, Alkhanshali found himself trapped as bombs from the Houthis rebels rained down on the capital. Yemen's civil war had begun.

"These blasts, these airstrikes, there's no pattern. They're just very sporadic and you hear the ground shake and children crying. And it was very hard to live that moment," he recalled. "There's no logical trajectory to get me from that point to being here in front of you today and I'm really fortunate for that."

Taking Eggers through his story, Alkhanshali said, was somewhat therapeutic.

"Dave had the foresight of starting backwards. A lot of those traumatic experiences had just happened to me just a few weeks before," he said.

"I always go into it knowing at any point we can stop. And nothing gets printed without Mokhtar's approval. And we meet when he wants to meet and we talk about whatever he's comfortable talking about. That's why it takes a long time. Almost three years in this case," the author said.

Eggers went into Alkhanshali's story as a skeptic of coffee culture, whose first cup didn't come until age 35.

"I used it just as fuel. ... I put a lot of sugar in. And just drank it to stay awake," he said. "I was still kinda cynical about the $4.75 cup of coffee or more expensive. I thought, that's ridiculous. That's so pretentious. But then to sort of backtrack and think, well, what should something cost? And the coffee gets picked individually, every cherry has to be chosen by a picker, put in the, put in their bag. ... I'm always thinking of the person who first picks that ripe, ripe ruby-red cherry. You can't get these people out of your mind."

"The Monk of Mokha" gradually weaves together the history of coffee, Alkhanshali, and his ancestral home. Three years later, the war there continues.

"It's a horrific situation. The single worst humanitarian crisis in the world. Eighteen million people are food insecure. That's 70 percent of the population. That is over three million refugees now because of this war," Alkhanshali said. "But I know this war will end. And I believe that my project will outlast these bombs."

He thinks coffee can heal division here at home.

"This cup of coffee, it's crossed cultures and borders and political hardships to find its way to you ... and I think it's an incredible opportunity for us to really re-engage with each other."