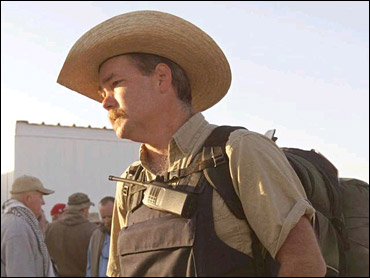 Thomas Hamill, a truck driver from Mississippi who escaped from his Iraqi kidnappers after three weeks in captivity, arrived in Germany on Monday for a reunion with his wife.

Hamill pried open a door in the house where he was being held north of Baghdad when he heard a U.S. patrol passing by Sunday, then led the troops to the house where two Iraqis were captured.

Also Monday, militiamen barraged U.S. forces with mortars in the holy city of Najaf in one of the more intense attacks on American troops, who have been holding back their full firepower to avoid enflaming the anger of Iraq's Shiite Muslim majority.

The shelling began overnight, when some 20 mortars hit in and around the former Spanish base that U.S. troops moved into a week ago. There were no casualties. Heavy mortar fire resumed at midday Monday.

Insurgents opened fire Monday in the Iraqi capital, killing one American soldier and wounding two others, the U.S. military said.

Violence on Sunday killed nine U.S. soldiers across the country. In the heaviest attack, five Navy sailors and one Army soldier were killed in a mortar barrage against a base near Ramadi, west of Baghdad.