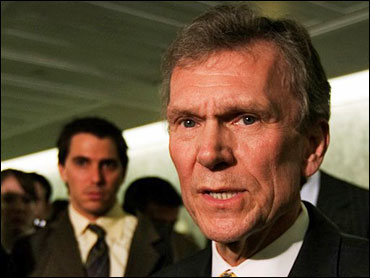 (AP Photo/Manuel Balce Ceneta)
UPDATED President Obama's choice to run the Department of Health And Human Services, former Senate Democratic leader Tom Daschle, has withdrawn from consideration for the job because of his initial failure to pay $128,000 in personal taxes.

Daschle would have overseen Mr. Obama's efforts to reform the health care system.

The news comes on the same day that Mr. Obama's choice for chief performance officer withdrew from consideration for the job, also citing tax problems.

"It's something that I take responsibility for," the president told CBS News' Katie Couric Tuesday.

"I don't want my administration to be sending a message that there are two sets of rules," he continued, adding: "I think I messed up, I screwed up."

Mr. Obama added that he still believed Daschle was the best candidate for the job.

In a statement, Daschle explained his decision, saying that "30 years of exposure to the challenges inherent in our system has taught me...that this work will require a leader who can operate with the full faith of Congress and the American people, and without distraction."

"Right now, I am not that leader," he wrote, vowing not to be a distraction to the president's agenda.

Now, the president said, "we must move forward."

(AP Photo/David Zalubowski)
Daschle last month paid off about $140,000 in back taxes and in interest tied to his use of a car and driver and consulting work.

Mr. Obama's choice for Treasury Secretary, Timothy Geithner, also faced criticism over his initial failure to pay $34,000 in income taxes. Geithner was eventually confirmed by the Senate. The president's first pick for Commerce secretary, Bill Richardson, withdrew from consideration amid a federal investigation into contracts won by donors.

The spate of problems faced by Mr. Obama's picks for top jobs run counter to his efforts to convince the American people that he is bringing a higher ethical standard to the government.

The continued revelations are "an embarrassment and a thorny distraction from getting the people's work done," says CBSNews.com editor-in-chief Daniel Farber. (Read Farber's analysis of Daschle's withdrawal>.)

"I think the President would say to you that he didn't believe that we were going to change the way Washington has worked the past three decades in the first two weeks of this administration," White House Press Secretary Robert Gibbs in response to questions about his picks at a briefing today.

Gibbs, who said the president and Daschle spoke about the resignation, also defended the administration's vetting process at the briefing, saying the president "has confidence in the system."

He also insisted that the White House did not signal for Daschle to pull out.

"I don't know how much more clearly I can say 'no,'" he told reporters.

Mr. Obama may be learning that "putting yourself out there as an ethics crusader is easier said than done," says CBS News Political Director Steve Chaggaris. (Read Chaggaris' analysis of Daschle's withdrawal>.)

Some major newspapers editorial boards have called for Daschle to withdraw his name from consideration; The New York Times this morning said he should step aside and "let the president choose a less-blemished successor."

In addition to the tax issues, Daschle faced conflict of interest questions tied to income garnered from private sector work for health-related companies.

"Well, I don't know how you get paid $2 million by a lobbying firm and not call yourself a lobbyist," Nevada Republican Sen. John Ensign said, according to the Associated Press. "...So I personally think that Sen. Daschle, you know, was going to face some tough questions and, and to stop an embarrassment from happening for this president, I think he saved the president from being embarrassed next week in a public hearing."

In his statement, Daschle noted that while he "will not be the architect of America's health system reform," he remains "one of its most fervent supports."

"This was no ordinary appointment, and today is not a good day for the cause of health care reform," said Massachusetts Sen. John Kerry.

Daschle had previously apologized for the tax mistakes, calling them "completely inadvertent." Daschle said he had not initially been aware he needed to pay taxes on the car and driver.

"I was a little stunned. I thought he was going to get confirmed," Montana Democratic Sen. Max Baucus, chairman of the Senate Finance Committee, told the AP. "It's regrettable. He's a very good man."