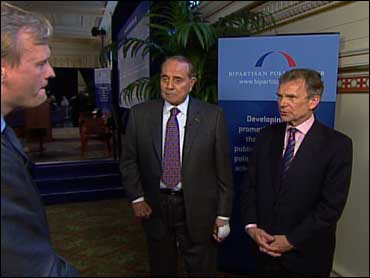 (CBS)
The Democratic-led Congress maintains it is working to create a health care reform package that can win Republican support, but if the bill is to be truly bipartisan, it should get in the range of 20 Republican votes, former Senate Majority Leaders Tom Daschle (a Democrat) and Bob Dole (a Republican) said Wednesday.

"I'd like to have 20 Republicans" in the Senate vote on the health care reform package, Dole said.

Daschle concurred. "It has to be something where you have a double-digit number of Republicans and Democrats," he said.

The two men explained how they compromised on hot-button issues like a mandate for all Americans to have insurance and a government-sponsored, plan (or "public option"), to produce their report for the Bipartisan Policy Center.

"On the mandate, it was not an easy thing for me to give on," Dole said. "When we started, we decided we weren't going to let two or three things kill our effort."

Daschle and Dole are two founders of the Bipartisan Policy Center, which has made health care its signature issue. The center's report, which the founders intend to discuss with Congress, takes a broad approach to addressing health care challenges like delivery, cost, coverage and financing -- in a manner that is politically palatable for both the left and the right. The policy center spent a year and a half conducting research, analysis, public policy forums and targeted meetings and workshops with health care experts to come up with their approach.

"We've offered some solutions that may offer ways in which to compromise on some of the tough issues," Daschle said.

The report does not recommend a public plan, a sticking point for many Democrats.

"We compromised on that substantially," said Daschle, President Obama's first nominee for the position of Secretary of Health and Human Services. Daschle withdrew his nomination in February amid tax problems.

The report does recommend creating state or regional health insurance exchanges, and implementing a federal fallback if the exchanges are not set up in a timely manner. It also suggests an individual mandate and other solutions like limiting out-of-pocket premiums and investments in comparative effectiveness research.