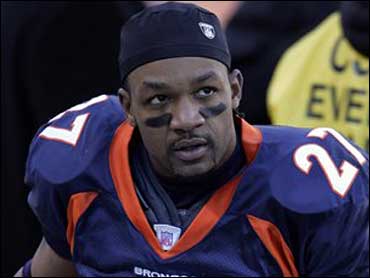 DENVER (CBS/AP) Darrent Williams' 10-year-old son broke down at Williams' funeral when he realized he would never speak to his father again, Tierria Leonard, the mother of Williams' two children, told the court at the sentencing of Williams's killer, Willie Clark. The boy had asked his mother if the Denver Broncos cornerback had his cell phone with him in the casket when he was buried.

Clark was sentenced to life in prison plus 1,152 years Friday for the New Year's Day 2007 slaying of Williams after a confrontation at a nightclub in downtown Denver. Colo. During a hearing earlier Friday, Clark was declared a habitual criminal, making him eligible for the additional 1,152 years in prison.

Rosalind Williams, Darrent Williams' mother, urged the smiling Clark to express remorse for the killing saying "make your mom and your dad proud. I know my son made me proud."

Prosecutors portrayed Darrent Williams as a peacemaker as his friends argued with gang members who had taken exception to the special treatment afforded the celebrated athletes outside the nightclub, and continued the confrontation inside the nightclub after somebody in Williams' group sprayed champagne in celebration, according to witnesses.

The dispute continued outside as Williams and his group tried to leave. Witnesses said Clark desperately searched for a gun following the altercation, hopped into an SUV to catch up with a limousine carrying Williams, then fired the fatal shots.

Clark's defense attorneys have 45 days to file an appeal. Both left the court without comment.