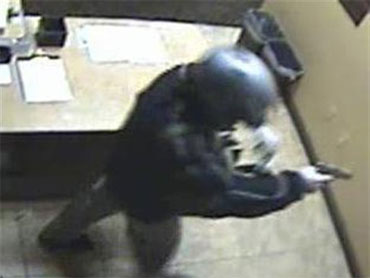 Authorities will be looking out for anyone trying to cash high-denomination chips at the posh Bellagio resort after an armed bandit stole at least $1.5 million in casino chips and fled on a motorcycle.

However, he might find it hard to redeem the chips at any other casino except the Bellagio, an Italian-themed casino with a wall of famous fountains along the Las Vegas Strip.

The Bellagio is a top tourist destination and has been the backdrop for several Hollywood films, including the 2001 casino robbery saga, "Ocean's Eleven," notes CBS News Correspondent Ben Tracy.

Gordon Absher, spokesman for Bellagio owner MGM Resorts International, said the casino chips aren't the same as cash. "At some point they have to be redeemed," he said.

Chips are unique to casino properties and are generally not interchangeable, although state regulations allow casino companies to redeem chips from sister properties with some restrictions.

Absher wouldn't say if MGM Resorts properties are among Las Vegas casinos that embed radio frequency devices in chips. But police will be keeping a close eye on cashier cages in case someone shows up with a stack of $25,000 chips.

"We have safeguards in place," police Officer Barbara Morgan said.

The robbery had the makings of a scene straight out of a Hollywood caper.

Police say a man wearing a jumpsuit and a motorcycle helmet with white stripes walked into the casino with a gun, robbed a craps table then sped away on a motorcycle in the dead of night.

The 3:50 a.m. robbery happened "about as quick as you can do it," police Lt. Clinton Nichols told The Associated Press.

"He entered the casino and went to a craps table," Nichols told reporters, "where he confronted several patrons with a firearm. He told everyone not to move and he took approximately $1.5 million worth of casino chips."

Police later released an 11-second video showing a man running through a casino entry lobby with a gun in his right hand. At one point, he turned and pointed the weapon behind him.

Estimates of the amount taken from the Bellagio varied. Nichols said it could approach $2 million. In a press release, police put the amount at about $1.5 million.

Police suspect the same man wore a helmet, flashed a gun and sped away on a black sport motorcycle after robbing the Las Vegas Suncoast Hotel & Casino poker room on Dec. 9.

That heist netted less than $20,000 from a poker room cashier, police said.

Police also released several photos Tuesday of the robber at the Suncoast.

To see Ben Tracy's report, including some video of the holdup man running through a casino lobby in his motorcycle helmet, click on the video below: