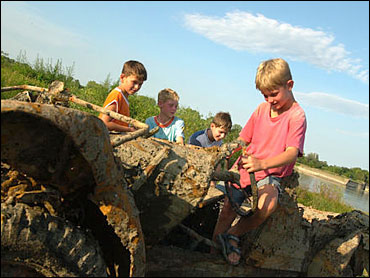 As the mass of tangled iron emerged from the water, wide-eyed townspeople marveled at the catch — a World War II German military jeep, coughed up by the drought-shrunken Danube River.

Batina fire chief Josip Valkai ran an expert eye over the so-called Kuebelwagen just dragged out by a truck. "The Volkswagen insignia and motor in the rear make it a dead giveaway," he said. "So does the faintly visible Nazi swastika on gasoline cans we found tucked inside."

Until now, the leftovers on this pivotal battlefield have been small — spent cartridges, the occasional skull. But as months of drought have drained the Danube to its lowest level in a century, larger relics are coming to light.

Among the items awaiting recovery this week are a tank whose turret surfaced several days ago and an armored personnel carrier.

Smaller items recently dredged from the river bottom include Schmeisser rifles and a crocodile-leather wallet, its contents soaked past recognition.

Downstream, in Serbia, the rusty remnants of warships believed to belong to Nazi Germany's Black Sea Fleet have begun protruding in recent days 110 miles east of the capital, Belgrade. Authorities on Thursday warned ships to steer clear because of live ammunition believed still to be on the ships.

The river depth, normally as much as 50 feet in some places, has fallen to barely 10 feet.

The vessels are believed to have been deliberately blown up by retreating German troops to impede Soviet forces in the final stages of World War II.

War relics are no novelty in the Batina area of northeastern Croatia. Up to 60,000 soldiers perished here as Soviet troops caught up with German forces retreating toward Budapest in late 1944.

The Red Army triumphed after 12 days of fighting in one of the pivotal battles in the allied liberation of the Balkans.

Batina's old-timers still remember cavalry soldiers trudging back across the river on horseback, with one or two bare horses reined in along their sides — their riders dead or missing.

"It's no wonder skeletons and various war artifacts keep surfacing in our region," said Ivica Prakatur, a retired hospital nurse.

Moscow, which funds a memorial at Batina, plans to send experts to the scene to investigate some of the finds.

"The river was wide and deep and certainly holds many mysteries," said Anatolij Calisev, a military attache at the Russian Embassy in Zagreb, the Croatian capital. "Maybe there are documents that could help identify victims."

The heat wave gripping Europe, described by experts as one of the worst in 150 years, is slowly moving southeastward after killing scores of people across the continent.

In Bulgaria, shipping officials warned earlier this week that navigation on the Bulgarian stretch of the Danube could be suspended by the end of the week. Water levels in some places had fallen nine feet to their lowest in 100 years.

In Romania, the Danube had its lowest flow of any August since measurements began in 1840, the state news agency Rompres reported. A nuclear power plant in eastern Romania may have to close one reactor if the water level falls another 28 inches because too little water would be drawn to cool it, the government said Friday.

In Croatia, a Ukrainian barge, the Fyodor Ryabinin, briefly ran aground Tuesday.

None of this mattered to kids in Batina, who waded through the ordinarily mighty river, now barely knee-high.

"I feel like Moses," Laszlo Kovacs said as plodded to the other side.