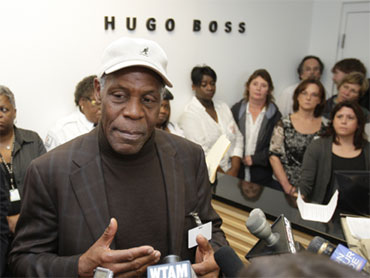 A smiling Danny Glover offered hugs, kisses and moral support Tuesday to Cleveland-area workers at a men's suit plant that faces a shutdown next month with the loss of 375 jobs.

Workers at the Hugo Boss plant whooped and cheered as the star of the "Lethal Weapon" movies toured the operation Tuesday.

Mariana Tarla, 52, of Cleveland, wiped away tears after Glover kissed her at the table where she was pressing black suits awaiting sleeves to be sewn on.

Co-workers clapped in response to the kiss, and one asked, "Can I have one?"

After the half-hour tour across a plant floor rivaling a football field in size, Glover held a news conference and appealed to Germany's Hugo Boss AG to reverse its shutdown decision.

"I saw men and women who work hard, who are the real backbone of this community," said Glover, who led a boycott of Hugo Boss formal wear at the Academy Awards on March 7.

Hugo Boss said that for various reasons it didn't promote its suits to those attending the Oscars ceremony.

The union representing the workers, Workers United, says the facility is profitable but is being shut down because Hugo Boss can make clothing more cheaply in Europe. The company says the plant is not globally competitive.

Hugo Boss, famed for its stylish fashion, announced in December that it would close the plant April 27. The shutdown target date remains unchanged, the company said Tuesday.

Andreas Stockert, Hugo Boss chief operating officer, said in an e-mail statement relayed from Germany that the pending shutdown was "an unfortunate but necessary business decision."

He said the company was considering sweetening an offer of severance, job search help and other benefits for affected workers and totaling $1.5 million.

"We strongly encourage the union to let us help their members in this critical transition rather than standing in the way," he said.

The company said it wants to talk to the union about the severance packages. The union said it is focused on saving jobs.

Most plant workers earn about $13 an hour.

During negotiations last year, the company told workers it wanted to lower wages to $8.30 hourly, according to the union. The company said concessions were rejected by the union.

Hugo Boss employs another 900 people in the U.S. in stores, showrooms and administrative positions.
By Thomas J. Sheeran