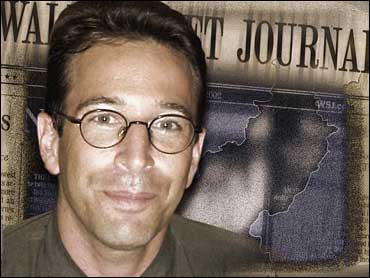 Scraps of refuse mix with chalky dust on the desolate dirt path where Wall Street Journal reporter Daniel Pearl spent the last tortured days of his life. It was in a concrete shed here that the killers videotaped his gruesome murder, and in the overgrown yard outside that the journalist's dismembered remains were finally found.

Four people have been convicted in the American reporter's kidnapping and murder, including the British-born militant who masterminded his abduction on Jan. 23, 2002.

Investigators in the case have uncovered a web of extremism, with operatives from several Pakistani groups and possibly Osama bin Laden's al Qaeda network in on the plot. That mix is bad news for Pakistan, which has endured a series of attacks since its president threw his support behind the U.S.-led war on terrorism.

A year after the 38-year-old South Asia bureau chief was snatched off the streets of this pulsing seaside city, mysteries still abound.

Authorities are reluctant to discuss the murder. Suspects disappear or are found dead. Crucial dates are confused. Confessions are offered and then recanted.

There is agreement on one point: Nobody who physically carried out the killing has been convicted. None of the four men sentenced is even believed to have ever been at the shed where Pearl was held. Three of the convicted men never met Pearl at all.

"There are people — four or five people — still out there," said Jameel Yusuf, a lead investigator in the case and the last person Pearl is known to have met before his abduction.

Saeed, the mastermind, was a member of the Pakistani militant group Jaish-e-Mohammed, and spent five years in jail in India for the 1994 kidnappings of four Westerners. He was released in 1999 as part of a deal to free the passengers of a hijacked Indian jetliner.

Three other men, all allegedly members of the Lashkar-e-Jhangvi extremist group, have been detained but not charged since they led police to Pearl's body in May, senior Karachi intelligence sources told The Associated Press.

The three — Fazal Karim, Naeem Bukhari and Zubair Chishti — are believed to have been involved in the kidnapping and to have taken part in holding Pearl.

Karim has told police he did not kill Pearl. He says three Middle Eastern men came to the ramshackle shed to slit Pearl's throat, probably around Feb. 1 or 2, a few days after the reporter tried to escape.

The grisly scene was captured on video and sent to the U.S. Consulate on Feb. 21. It was received just ahead of the Muslim holiday of Eid al-Adha, when animals are traditionally slaughtered by cutting their throats.

"It was a message from the terrorists to the West that now we will not only slaughter goats and cows, but also American Jews," said chief prosecutor Raja Qureshi. Pearl was Jewish. "It was a horrible, horrible message."

Indeed, Pearl's abduction — which the Journal will mark by unveiling a statue in his honor Thursday at its Manhattan headquarters — highlighted the dangerous alliance that has emerged among violent groups in Pakistan since President Pervez Musharraf chose to support the U.S.-led war on terrorism.

Suspects in the Pearl case have come from three Pakistani militant groups, Jaish-e-Mohammed, Lashkar-e-Jhangvi and Harakat ul-Mujahedeen Al-Almi. At least one suspect, Karim, has drawn a link between the murder and al Qaeda.

Karim identified a Yemeni arrested in Karachi in September along with top al Qaeda operative Ramzi Binalshibh as one of three Middle Easterners he says killed Pearl. Police and intelligence officials have refused to name the Yemeni or say where he is being held.

Authorities will not even officially acknowledge holding Karim, Bukhari and Chishti, although investigators discuss the matter off the record and the men's families say they have not been seen since May.

Binalshibh and several al Qaeda suspects arrested with him were handed over to U.S. custody and taken out of Pakistan. Their whereabouts are unknown.

"There is an al Qaeda connection," said Yusuf. "There has to be."

Police are also looking for Saud Memon, who owns the shed where Pearl's remains were found. Memon, an industrialist named by several arrested members of Harakat ul-Mujahedeen Al-Almi as their chief financial backer, is believed to have fled Pakistan.

Asif Ramzi, a leader of Lashkar-e-Jhangvi who is also wanted in the case, was found dead in December in the rubble of a suspected Karachi bomb factory. Police say he died while making a bomb, but intelligence officials say Ramzi may have been silenced — either by authorities or fellow extremists.

In all, at least five suspects wanted in the case remain at large.

Pearl's killing foreshadowed several other attacks on Westerners in Pakistan, including the car bombing of the U.S. Consulate in Karachi and a similar attack in the city that killed 11 French engineers.

And although it's far from solved, the case offers a glimpse at the extremism coursing through Pakistan. Nearly a year after his murder, it's a web authorities are still untangling.