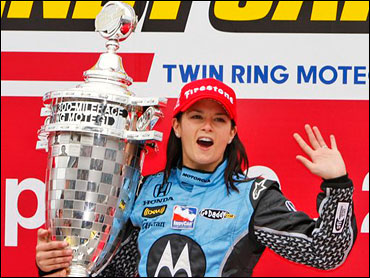 Danica Patrick was always sure a woman could win a race. And now the questions about her will surely stop.

Patrick made it to the place she wanted to be for so long - Victory Lane. She became the first female winner in IndyCar history Sunday, capturing the Indy Japan 300 in her 50th career start.

"I'm glad it finally happened," the 26-year-old driver said. "But I would be lying if I told you I didn't think it would be me."

Her owner was ecstatic, insisting more victories await. Her family could not congratulate her enough. All of which made Patrick a bit teary.

"When it actually happened, maybe it was a little anticlimactic," she said. "Then the emotions came out and that was a little girly of me."

Win No. 1 was a long time coming. Patrick finished a career-best seventh in the standings last year when her best finish was second in the race at Detroit's Belle Isle. Her first IndyCar race was in 2005 at Homestead-Miami.

"I've been asked so many times when and if I can win my first race," she said. "And, finally, no more of those questions."

Patrick was welcomed by her family near the podium.

"There was a lot of "I love you,' and 'congratulations,' Patrick said. "My dad said it was the best day of his life."

"I'm thrilled for her that the monkey is finally off of her back," said Andretti, co-owner of Andretti Green Racing. "We have all believed in her and she proved today that she is a winner. Frankly, I think this is the first of many."

At the 2005 Indy 500, Patrick nearly won the pole and became the first female driver to lead the race. She wound up fourth, the best finish by a woman at Indy and a result that helped her claim rookie of the year honors.

Sunday's race, which was delayed a day because of a wet track, was won by a combination of cool composure and shrewd strategy. Patrick took the lead from pole-sitter Helio Castroneves on the 198th lap in the 200-lap race.

"When I had to talk into my radio after the race, all I could say was 'Thank you,"' said Patrick, who finished 5.8594 seconds ahead of Castroneves on the 1.5-mile Twin Ring Motegi oval.

"It was a fuel-strategy race, but my team called it perfectly for me," Patrick said. "I knew I was on the same strategy as Helio and when I passed him for the lead, I couldn't believe it. This is fabulous."

Patrick started from the third row and made her final pit stop under caution on the 148th lap, along with Castroneves and Ed Carpenter. All the leaders were taking it easy, saving fuel after the ensuing restart and Patrick stayed within sight, realizing she would have a chance when the top contenders headed to the pits late in the race.

Patrick was as low as eighth place on the 189th lap, but Carpenter pitted with about 10 laps to go and she went from fourth to second after Dan Wheldon and Tony Kanaan pitted on the 196th.

After flying for about 12 hours to attend the finish of the last race in the Champ Car World Series Sunday in Long Beach, Calif., Patrick, appearing refreshed and relaxed, gave a lot of the credit for her win to team engineer Kyle Moyer.

"I knew that the last stint was going to be important, that was a good call from the pits from Kyle Moyer, who calls my races, to pit on the end of the yellow flag." she said. "It was going to be close on fuel, but we were in the process of giving ourselves the best opportunity possible.

"As soon as we went green after that yellow flag, it was all about saving fuel."

Patrick said she began to look for Castroneves with about 10 laps to go.

"I knew I was P2 (position two) by then. Five laps later, I see he's backing up, saving fuel," she said. "I was like, `Hey, kick it up a notch and get by.' If this is what it comes down to, you better not think to yourself I wish I had tried a little bit harder.

"It probably would have happened whether I would have pushed or not because it seemed like he was running out of fuel quite a bit at the end. But it was really very nice to drive by him at that point."

Even then she said she wasn't sure she was going to win until Moyer came on the radio and told her, "You can use as much fuel as you want. Bring it around, the checkered flag is yours."

Patrick said, "That was a big relief. A long time I've waited for this. I wish it would have happened a long time ago, but I'm not going to argue with the program. It happened the way it was supposed to happen and I believe everything happens for a reason."

In Japan, Castroneves, awarded the pole position after qualifying was rained out Friday, said Patrick ran a great race.

"With five laps to go, I was saving fuel," Castroneves said. "When Danica passed me, I realized she was the leader. She did a great job, passed me fair and square and that shows you how competitive our series is."