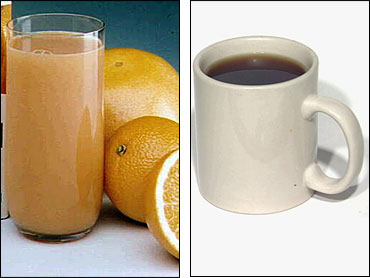 Most people know drinking alcoholic beverages can be risky if you're taking certain anti-depressants or pain relievers.

But many don't know that consuming some everyday drinks, such as coffee, tea, milk, and orange juice, is potentially troublesome if you're on some common medications.

Lisa Freeman, Editor in Chief of ShopSmart Magazine, sorted it all out for Early Show viewers Wednesday.

The drinks/drugs mixes could prove troublesome because compounds in the drinks interact with the medicines, or interfere with the enzymes in your body that would break down and process the pharmaceuticals.

Freeman stressed the importance of reading the labels on medications before taking them, pointing out that a lot of medications have warnings on what not to drink them with.

Many people take their meds with coffee or milk -- that's not a good idea. Take them with water.