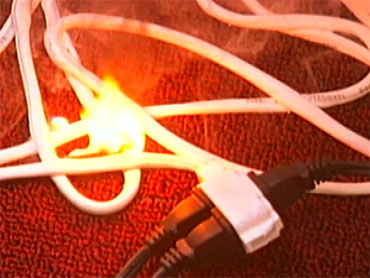 Your happy holidays can quickly turn disastrous if you don't have the right Christmas decorations.

Fire experts say one of the worst home hazards this holiday season is from counterfeit electrical products -- everything from fake tree lights to power cords that look like the real thing.

Daniel Baldwin, assistant commissioner of the Office of International Trade, told CBS News, "There is a significant volume coming into this country of unsafe products and counterfeit products."

Baldwin said, "It's much more profitable than narcotics smuggling. It's a very profitable enterprise."

Also look at packaging, Koeppen said. The fake products, she pointed out, don't use a company name and often have misspelled words. A legitimate product, on the other hand, carries a hologram label from Underwriters Laboratories (UL), which certifies the device as safety tested.

But sometimes even the UL mark can be phony, Koeppen said, pointing out a counterfeit label on an extension cord.

Koeppen said, "So you may save a few bucks if you buy a cheap extension cord but it could burn your house down?"

Brenner responded, "Absolutely. Electricity is uniquely unforgiving. It can shock and it can kill you."

Koeppen and her team wanted to see if they could find fake tree lights for sale. So they headed out with fire marshals in Montgomery County, Md., to check discount stores for violations.

Within minutes, Ricardo Shepard, of the Montgomery County MD Fire and Rescue Service, discovered lights with phony certification labels. At another location, inspectors found lights with no labels at all. The same was true of a third location Koeppen visited.

"You know, it's kind of scary to think that somebody's going (to use these items,)" Shepard said.

All three stores, Koeppen added, have agreed to remove the counterfeit lights from their shelves.

• Shop at well known retailers. Many of these fake goods show up in small discount stores or mom and pop shops where they sell a little bit of everything.

• Look at the packaging. Fake goods often lack a company name or contact information, or even something as simple as a bar code. Look for a mark like the UL from Underwriters Laboratories, meaning it's been tested for safety.

• Pay attention to the details -- counterfeit goods are cheap -- and sometimes you can tell just by looking at the poor workmanship, or if it just seems flimsy.