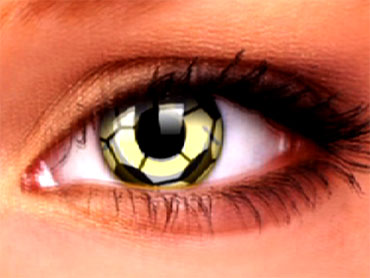 Halloween is just days away. But be careful if your costume includes decorative contact lenses. They may look cool, but they can do serious damage to your eyes, reports "Early Show" Consumer Correspondent Susan Koeppen.

She said, "It's against the law to sell decorative contacts lenses without a prescription. In fact, the state of Ohio has gone after 10 companies so far this year for doing just that. And our own investigation found plenty of these lenses for sale -- no questions asked."

In Lady Gaga's video for the song "Bad Romance," her wide-eyed look set off a fashion explosion among teens. A YouTube instructional video had more than 14 million views, showing fans how to mimic the pop star's style.

With Halloween around the corner, designer contact lenses make options for your eyes endless. But if not used correctly, that cool change of color can also be dangerous.

Laura Butler was driving with her 3 year-old in the back seat when she was suddenly blinded. She turned her brown eyes blue with colored contact lenses she had just purchased at a novelty store without a prescription.

Butler told CBS News, "It was an excruciating pain. … It felt like I had been cut with something very sharp, and not just once."

One of the contact lenses sliced Laura's cornea, causing a viral infection in her left eye.

Butler said, "The doctor ultimately told me the result of that kind of injury could be permanent vision loss."

Dr. Thomas Steinemann, an ophthalmologist with MetroHealth Medical Center and the American Academy of Opthalmology, says any lens must be fitted to your specific eye shape by a medical professional to avoid a possible injury.

Steinemann said, "It's more than a piece of costume jewelry. This is a medical device. ... One size does not fit all. Even though the lens is not correcting your vision, your eye shape is very different from the next person."

Koeppen asked one retailer, "So they're safe to use?"

He replied, "Yup, they're safe to use. We have tons of people buy them all the time."

Steinemann said, "I'm disappointed more than anything. We're still seeing patients through our emergency room with urgent and emergency eye problems related to over-the-counter wear of these lenses."

She said, "Take yourself, your children, anybody who wants to change their eye color, take them to a physician and be fitted. It's cheaper in the long run and it's much less painful."

Koeppen added on "The Early Show", "At some of the stores we visited, I did have to sign a waiver stating I realized there was a risk to wearing them. But not one store asked me for a prescription. One of the Halloween stores has pulled their contact lenses from the shelves following our investigation."

Can you get cosmetic contacts from your eye doctor?

Koeppen said, "You should go see your doctor. You go to your eye doctor and say, 'I want to wear colored contacts. I want to wear these funky lenses,' and see if they can get the lenses for you. We should point out, the lenses in Lady Gaga's video, she says that those were computer animation, and those circle lenses that cover the total eye, those are actually illegal in the U.S. So you're not going to be able to get those. But the colored lenses you can get from your doctor."