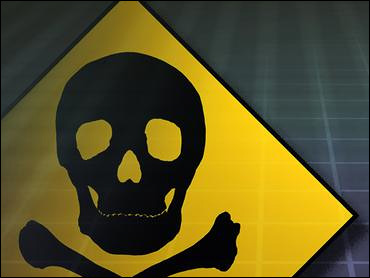 Household cleaning products may seem just bottles under the kitchen sink to you, but to a child, the bright colors and unique shapes can be very alluring.

"Early Show" Consumer Correspondent Susan Koeppen reported on a new study involving kids and cleaners, done by the American Academy of Pediatrics, that finds bleach is the No. 1 cleaning product kids get into.

However, they can also get their hands on things like dish soap, laundry detergent and carpet cleaners. Experts are concerned, because many of these products don't come with safety tops.

Koeppen shared the story of Tamara Ensign and her son, Keegan, of Lewis Center, Ohio. They were in their front yard back in May, cleaning off some old toys from the garage; Tamara turned her back for a second when Keegan let out a horrifying cry.

Tamara told Koeppen, "It was a loud inhale, along with a wail. It was one of the most horrible sounds I had ever heard."

Keegan got his hands and mouth on that bottle of dish soap.

"Bubbles were actually coming out of his mouth," Tamara said. "So it was quite scary, because I knew he definitely had soap in his mouth."

Keegan was rushed to the hospital. He spent hours in the emergency room, but escaped without serious injury.

Tamara said of the incident, "I was mad at myself for not being more precautious and being alert of what I was doing."

According to the American Association of Poison Control Centers, a non-profit poison prevention and treatment organization, in 2008, poison control centers handled 1.29 million cases of child poisonings, and 124,934 of them dealt with household cleaning products.

Dr. Heath Jolliff, a toxicologist with Nationwide Children's Hospital in Columbus, Ohio, told Koeppen, "We see chemicals that are very dangerous look just like something very simple and safe, like something that will look like Kool-Aid to a child or Gatorade."

According to a study in the journal Pediatrics, children ages 1 to 3 account for 72 percent of cleaning product poisonings, with 40 percent of poisonings coming from cleaners in spray bottles.

Lara McKenzie, a researcher with Nationwide Children's Hospital, explained, "It may be the case that children of that age are able to actually trigger the spray bottle easier than they can open some other products. Or the fact that the nozzle on the spray bottle is not put into closed or locked position."

Koeppen's team wanted to see what would happen when we gave a group of toddlers spray bottles filled with water. Within minutes, they were spraying, spilling and swallowing the liquid.

Koeppen asked one of the mothers whose children drank from the bottles, "Did you think she was going to be able to open these up and start spraying and taking a drink?"

The mom replied, "I'm actually surprised how quickly she did it. … She went right to drink it. ... It's scary."

As for Tamara Ensign, she now locks up all of her cleaners -- including the dish soap.

Tamara says parents should "just be alert and be aware of what you do."

She said, "It just takes a second for your child to get into something."