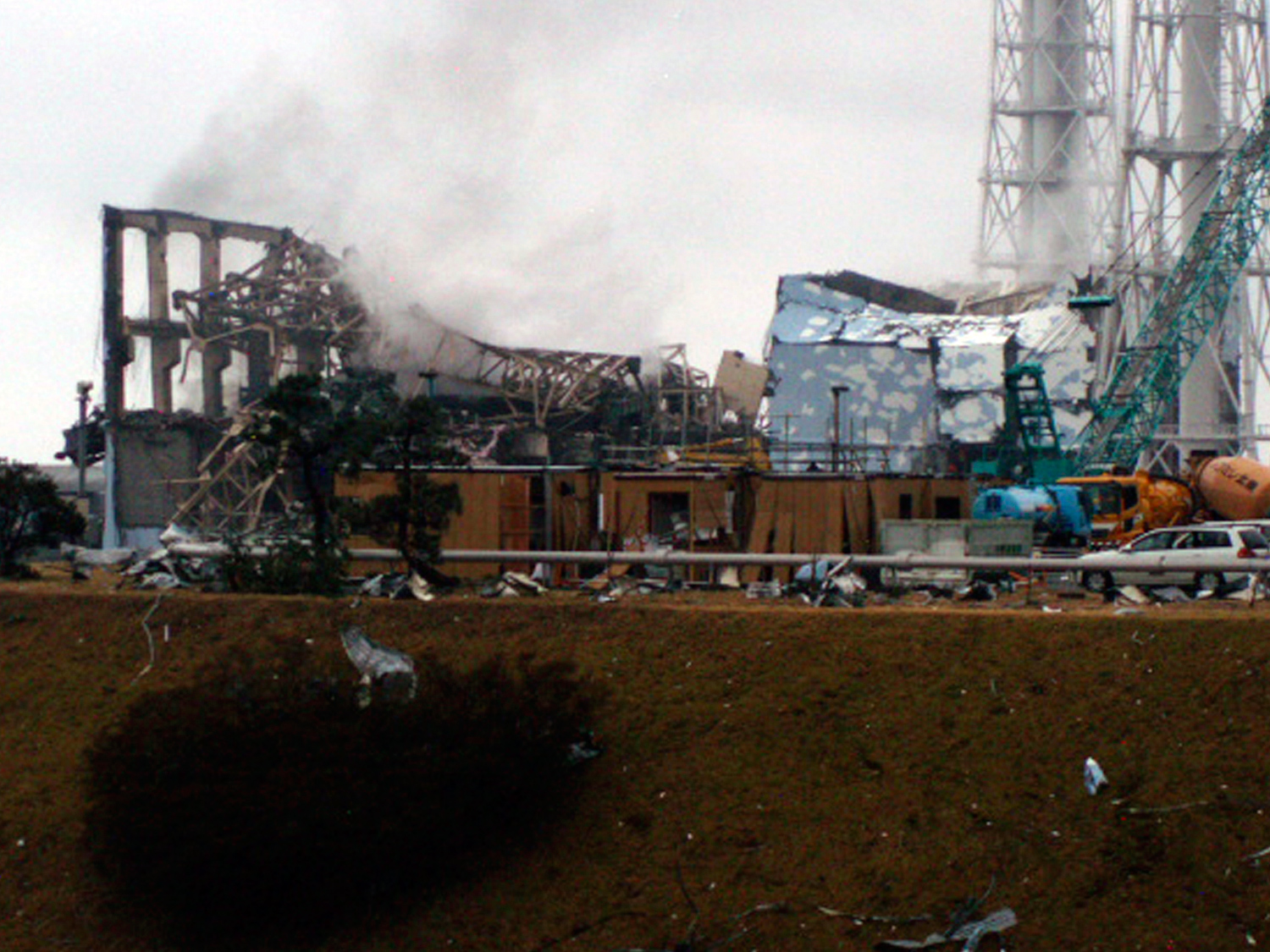 TOKYO - Two weeks after an earthquake and tsunami triggered a crisis at a nuclear plant, the facility is still not under control, and the government said Friday there is a suspected breach at a reactor. That means radioactive contamination at the plant is more serious than once thought.

Japanese leaders defended their decision not to evacuate people from a wider area around the plant, insisting they are safe if they stay indoors. But officials also said residents may want to voluntarily move to areas with better facilities, since supplies in the tsunami-devastated region are running short.

The escalation in the nuclear plant crisis came as the death toll from the quake and tsunami passed the grim milestone of 10,000 on Friday. Across the battered northeast coast, hundreds of thousands of people whose homes were destroyed still have no power, no hot meals and, in many cases, no showers for 14 days.

The uncertain nuclear situation halted work at the Fukushima Dai-ichi complex, where authorities have been scrambling to stop the overheated facility from leaking dangerous radiation. Low levels of radiation have been seeping out since the March 11 quake and tsunami knocked out the plant's cooling system, but a breach could mean a much larger release of contaminants. The most likely consequence would be contamination of the groundwater.

"The situation today at the Fukushima Dai-ichi power plant is still very grave and serious. We must remain vigilant," a somber Prime Minister Naoto Kan said. "We are not in a position where we can be optimistic. We must treat every development with the utmost care."

The possible breach in the plant's Unit 3 might be a crack or a hole in the stainless steel chamber of the reactor core or in the spent fuel pool that's lined with several feet of reinforced concrete. The temperature and pressure inside the core, which holds the fuel rods, remained stable and was far lower than what would further melt the core.

Nuclear expert James Acton told CBS' "The Early Show" Friday that if the reactor core has in fact been breached, "this creates the possibility of a much larger release of radiation into the environment than we have seen to date. But I think it's still worth emphasizing that the chance of a catastrophic release of radiation on the scale of Chernobyl is still very low, even at this point."

Suspicions of a possible breach were raised when two workers suffered skin burns after wading into water 10,000 times more radioactive than levels normally found in water in or around a reactor, the Nuclear and Industrial Safety Agency said.

Water with equally high radiation levels was found in the Unit 1 reactor building, Tokyo Electric officials said. Water was also discovered in Units 2 and 4, and the company said it suspects that, too, is radioactive. It was not clear whether the water in each unit came from the same source, officials said, but acknowledged the discovery would delay work inside the plant.

The alarm Friday comes two weeks to the day since the magnitude-9 quake triggered a tsunami that enveloped cities along the northeastern coast and knocked out the Fukushima reactor's cooling systems.

Police said the official death toll jumped past 10,000 on Friday. With the cleanup and recovery operations continuing and more than 17,400 listed as missing, the final number of dead was expected to surpass 18,000.

Kan apologized to farmers and business owners for the toll the radiation has had on their livelihoods: Several countries have halted some food imports from areas near the plant after elevated levels of radiation were found in raw milk, seawater and 11 kinds of vegetables, including broccoli, cauliflower and turnips.

He also thanked utility workers, firefighters and military personnel for "risking their lives" to cool the overheated facility.

The nuclear crisis has compounded the challenges faced by a nation already saddled with a humanitarian disaster. Much of the frigid northeast remains a scene of despair and devastation, with Japan struggling to feed and house hundreds of thousands of homeless survivors, clear away debris and bury the dead.

"It's still like I'm in a dream," said Tomohiko Abe, a 45-year-old machinist who was in the devastated coastal town of Onagawa trying to salvage any belongings he could from his ruined car. "People say it's like a movie, but it's been worse than any movie I've ever seen."

Government spokesman Yukio Edano insisted that people living 12 to 20 miles from the plant should still be safe from radiation as long as they stay indoors. But since supplies are not being delivered to the area fast enough, he said it may be better for residents to voluntarily evacuate to places with better facilities.

"If the current situation is protracted and worsens, then we will not deny the possibility of (mandatory) evacuation," he said.

Edano said the government "will continue to revisit this and as we have done so, we will provide whatever advice as necessary. Safety is the priority."

NISA spokesman Hidehiko Nishiyama said later that plant operator Tokyo Electric Power Co. was issued a "very strong warning" for safety violations and that a thorough review would be conducted once the situation stabilizes.

A breach could mean a leak has been seeping for days, likely since the hydrogen explosion at Unit 3 on March 14. It's not clear if any of the contaminated water has run into the ground. Radiation readings for the air were not yet available for Friday, but detections in recent days have shown no significant spike.

Elevated levels of radiation have turned up elsewhere, including the tap water in several areas of Japan. In Tokyo, the tap water showed radiation levels the government standard for infants, who are particularly vulnerable to cancer-causing radioactive iodine, officials said.

The scare caused a run on bottled water in the capital, and Tokyo municipal officials are distributing it to families with babies.

Previous radioactive emissions have come from intentional efforts to vent small amounts of steam through valves to prevent the core from bursting. However, releases from a breach could allow uncontrolled quantities of radioactive contaminants to escape into the surrounding ground or air.

Edano said "safety measures may not be adequate" and warned that may contribute to rising anxiety among people about how the disaster is being managed.

"We have to make sure that safety is secured for the people working in that area. We truly believe that is incumbent upon us," the chief Cabinet secretary told reporters.

Meanwhile, damage to factories was taking its toll on the world's third-largest economy and creating a ripple effect felt worldwide.

Nissan Motor Co. said it may move part of its engine production line to the United States because of damage to a plant.

The quake and tsunami are emerging as the world's most expensive natural disasters on record, wreaking up to $310 billion in damages, the government said.

"There is no doubt that we have immense economic and financial damage," Finance Minister Yoshihiko Noda said. "It will be our task how to recover from the damage."

Still, there were examples of resilience, patience and fortitude across the region.

In Soma, a hard-hit town along the Fukushima prefecture coast, rubble covered the block where Hiroshi Suzuki's home once stood. He watched as soldiers dug into mounds of timber had been neighbors' homes in search of bodies. Just three bodies have been pulled out.

"I never expected to have to live through anything like this," he said mournfully. Suzuki is one of Soma's luckier residents, but the tsunami washed away the shop where he sold fish and seaweed.

"My business is gone. I don't think I will ever be able to recover," said Suzuki, 59.

Still, he managed to find a bright side. "The one good thing is the way everyone is pulling together and helping each other. No one is stealing or looting," he said.

"It makes me feel proud to be Japanese."