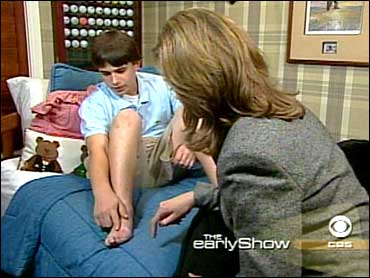 For many people, the scariest part about escalators is stepping onto that first step, or stepping off at the end. But safety experts say you could get seriously hurt while riding an escalator as well.

The Early Show consumer correspondent Susan Koeppen found children may be at the greatest risk.

Scooter Anderson is a star athlete. He loves to dribble and shoot a basketball.

By simply looking at him, you'd never know he's missing part of his foot.

When Scooter was 4 years old, he was riding down an escalator with his father. His sneaker was rubbing the side, and suddenly got sucked in.

Scott Anderson says, "About halfway down the escalator, I heard this scream, and he's calling. 'Daddy, Daddy,' and he's pointing to his foot. I tried to pull his foot out."

He knew it was bad.

"It was," Scott Anderson says. "I could see the blood coming through the sock and when I pulled his sock off, I could see just how serious it was."

Nothing could have prepared Scott and Diana Anderson for their son's devastating injury. His foot had been sucked into a small gap between the side of the escalator and the moving steps. He lost three toes, muscle, and tissue. It took seven surgeries and a skin graft to put his foot back together.

Diana Anderson says she had never heard of these types of accidents before it happened to her son.

But every year, nearly 10,000 people are sent to the emergency room because of escalator accidents. Many are children.

Last month in New York City, more than a dozen students were injured on a field trip to a movie theater. A screw sticking out of the side of an escalator caught on one boy's pants. He fell, causing those behind him to fall like dominos.

Teacher Frank Cammallere says, "It was mayhem. Kids were yelling at me, screaming, 'Save me, Mr. Cammallere! Save me! save me!' They felt like they were getting sucked in by the escalator."

And just this month, the family of 5-year-old Kerriana Johnson won a multi-million dollar lawsuit against a Florida department store. Kerriana lost three fingers when her hand was sucked into a gap in the store's escalator.

"It's unbelievable what an escalator can do to human flesh," says Kevin Doherty. He is a nationally certified escalator safety inspector. Doherty says he sees dangerous conditions on escalators all the time.

Doherty notes, "I think a lot of people climb on these escalators assuming that they're regularly checked, when, in fact, they're not."

Right now, there are no federal regulations requiring that escalators be inspected. Doherty says it's up to each state, city, or town to decide how often escalators should be checked, if at all.

CBS News asked Doherty to point out potential hazards on escalators in train stations, movie theaters, and shopping malls in and around New York City.

An escalator in a busy train station is used by thousands of commuters every day. But Doherty immediately spotted a serious hazard: missing teeth where you step off at the top.

"Those teeth are there for a reason," Doherty says. "They're there to keep shoelaces out. If they're not there, shoelaces will get sucked up, simply like sucking soda through a straw. It'll suck it right in."

At a movie theater and a mall, Doherty found another danger: screws protruding from the escalators' sides. If one caught your clothing, you could take a serious fall.

Doherty explains, "You're falling onto a piece of metal at an uncontrolled speed. You'll smash your head open."

One of the biggest hazards on an escalator is where the moving steps meet the side. Doherty says if you can fit more than the tip of a pencil in that space, the gap is too big. But Koeppen found several escalators where a pencil not only fit, it was sucked in.

In the end, Doherty gave most of the escalators a failing grade. He says that 60 to 70 percent of them "were dangerous enough that, if I had the authority, I would have taken them out of service immediately."

"Absolutely. No question about it," he says.

Since their son's accident, the Andersons have fought for national safety regulations for escalators. In the meantime, they say riders need to be aware of the danger.

"We go up to parents and tell them to look out for their children," Scott Anderson says, "We're living proof of what can happen."

So how can you stay safe on escalators?