A scientific expedition in the Arctic awoke to danger one night as the ice floe on which they were camped began breaking apart underneath them.

Pen Hadow, leader of the three-strong Catlin Arctic Survey which is measuring the thickness of the region's ice, spoke this week of the perils his team is facing in its journey to the North Pole. The team had been watching a "pressure ridge" of ice forming about 80 meters from their tent, Hadow told CBS News by satellite-phone, but thought that it would not pose a danger to them while they slept.

"It's like a giant combine harvester, sort of crunching the ice, coming towards the tent," Hadow said. "We thought we'd get away with it for the night, but actually at three o'clock it started up again and we awoke with an enormous sort of judder going through our ice towards the tent. We knew it was time to move."

Battling temperatures that can reach minus 50 degrees Celsius, the team (which includes Ann Daniels and Martin Hartley) was forced to hastily pack its gear and look for an escape route.

"We just managed to get along onto another ice floe that was touching it - a couple of meters where it touched," Hadow said.

Had they been faced with an open expanse of water, they may have been forced to put on their immersion suits and swim to safety, dragging their buoyant sledges behind them by rope. 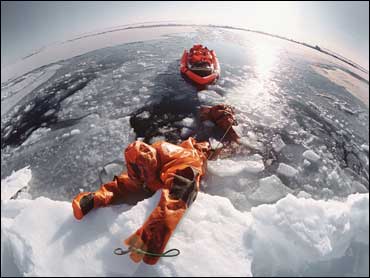 (Martin Hartley )
(Above: Pen Hadow trains in an immersion suit in the icy waters off Resolute Bay, Canada, in 2003.)

The survey's 700-mile trek, which began on February 28 and is scheduled to end at the Pole in May, is littered with dangers.

Aside from polar bears, numbing cold and exhaustion, the team must avoid potentially fatal "crush injuries" as they drag their 120-kg sledges over the chaotic jumbles of ice that form as floes crash together.

But the expedition is hoping that the data it collects during the 100-day journey will prove valuable in helping scientists determine at what rate the Arctic sea ice is melting. A specially-modified radar fixed to the back of one of the team's sledges will take around 12 million measurements of the ice's thickness.

Professor Wieslaw Maslowski of the Naval Postgraduate School in Monterey, Calif., is one scientist who is hoping to use the data in his studies of the region. He believes that summer ice in the Arctic may be almost gone sometime between 2010 and 2016.