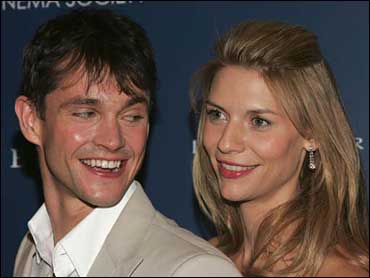 Celebrity couple Claire Danes and Hugh Dancy are the toast of New York these days. They turned up Sunday at the glittering Tony Awards, where Danes was a presenter, and then celebrated Monday at the premiere of their new movie, "Evening."

The movie, which hits theaters on June 29, may well hold a special place in their hearts. Danes, 28, and Dancy, who turns 32 next week, confirmed to The ShowBuzz.com that they began dating after they finished shooting the family drama in Rhode Island.

On Monday, when they joined co-stars Glenn Close, Vanessa Redgrave and Patrick Wilson at the premiere presented by the Cinema Society and Donna Karan at the Chelsea West Theatre, Darcy spoke of Danes in glowing terms.

"She's an amazing actress, and most of my scenes were with her," he told The ShowBuzz.com.

Both actors also had praise for their other co-stars. "As is always true of good actors and actresses, they're generous and they raise your game up, and that's how I felt," Dancy said.

Dancy himself got some good reviews as the star of the award-winning Broadway drama "Journey's End." The World War I play ended its run Sunday — just hours before it won a Tony for best revival of a play. The anti-war drama opened to rave reviews on Feb. 22, but closed after 125 performances.

The British-born actor, who has appeared in such movies as "Saving Grace" and "Black Hawk Down," was nominated for an Emmy for his role in "Elizabeth I."

Danes, a Golden Globe winner who previously dated actors Matt Damon and Billy Crudup, appeared on TV in "My So-Called Life" and starred in such award-winning films as "Shopgirl," "The Hours," "Stage Beauty" and "How To Make An American Quilt." But her most famous role may have been opposite Leonardo DiCaprio in 1996's "Romeo + Juliet."
By Mary-Jayne McKay