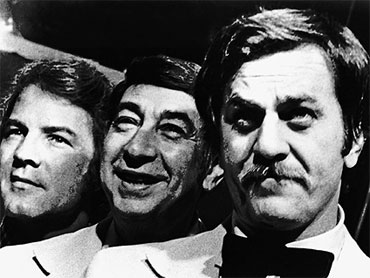 Don Meredith, one of the most recognizable figures of the early Dallas Cowboys and an original member of ABC's "Monday Night Football" broadcast team, died Sunday. He was 72.

Meredith's wife, Susan, told The Associated Press on Monday her husband died in Santa Fe after suffering a brain hemorrhage and lapsing into a coma. She says a private graveside ceremony is being planned and that family members were traveling to Santa Fe.

"He was the best there was," she said, describing him as kind, warm and funny. "We lost a good one."

Meredith played for the Cowboys from 1960-1968, becoming the starting quarterback in 1965. While he never led the Cowboys to the Super Bowl, Meredith was one of the franchise's first stars.

Over his nine-year career, Meredith threw for 17,199 yards and 111 touchdowns. He retired unexpectedly before the 1969 season.

Just two years after retiring from football, Meredith joined Keith Jackson and Howard Cosell in the broadcast booth as part of the "Monday Night Football" crew.

He quickly became one of the most popular broadcasters in sports because of his folksy sayings and country humor.

Meredith's signature call was singing the famous Willie Nelson song "Turn Out the Lights" when it appeared a game's outcome had been determined.

Meredith left ABC after the 1973 season for a three-year stint at NBC. He returned to the "MNF" crew in 1977 before retiring in 1984, one year after Cosell left the team.

Before a generation knew Meredith for his colorful broadcasting career, he was one of the most recognizable figures of the early Dallas Cowboys teams.

Meredith was drafted in the third round by the Chicago Bears in 1960 and was traded to the expansion Cowboys franchise for future draft picks.

"Dandy Don", as he was affectionately known, shared time under center with Eddie LeBaron before winning the starting job in 1965.

Meredith led the Cowboys to three straight division titles and to consecutive NFL Championship games in 1966 and 1967. Dallas lost both games though to eventual Super Bowl winners Green Bay.

In 1966, Meredith guided the Cowboys to their first-ever winning season (10-3-1). He was named NFL Player of the Year after throwing a career-high 24 touchdown passes and 2,805 yards.

Meredith was one of nine Dallas players selected to the Pro Bowl that year - the first of his two Pro Bowl years.

His last moment in a Cowboys uniform was painful. Meredith threw three interceptions in a 1968 playoff game against the Cleveland Browns and was pulled in favor of Craig Morton.

"I tried to talk him out of it," Dallas head coach Tom Landry said after Meredith announced his retirement. "But when you lose your desire in this game, that's it."

Meredith and Don Perkins were the second and third players inducted to Cowboys Ring of Honor in 1976.

Meredith was one of the first athletes to make the transition from the field to the color analyst - and the move to calling "Monday Night Football" was an easy one for him.

While on the show, Meredith was part of many memorable moments on ABC's landmark hit.

In 1970, Meredith was in the booth for the St. Louis Cardinals' 38-0 whitewashing of his former team. The Cotton Bowl crowd late in began chanting "We want Meredith!"

Meredith quipped, "No way you're getting me down there,"

Another famous Meredith moment occurred in 1974 at the Houston Astrodome. The Oakland Raiders were in the process of beating the Houston Oilers 34-0.

A cameraman had a shot of a disgruntled Oilers fan, who then made an obscene gesture. Meredith said of the fan. "He thinks they're No. 1 in the nation."

He was also in the booth when Howard Cosell announced that John Lennon had been assassinated on Dec. 9, 1980.

In addition to his broadcasting career, Meredith appeared in several TV shows and movies after his playing career ended. He had a recurring role in "Police Story" and was a spokesman for Lipton.

Before his career with the Cowboys, Meredith was a three-year at quarterback for SMU. He was an All-America selection in 1958 and 1959.

Meredith was born and raised in Mount Vernon, Texas - which is about 100 miles east of Dallas. He never played a home game outside of North Texas.