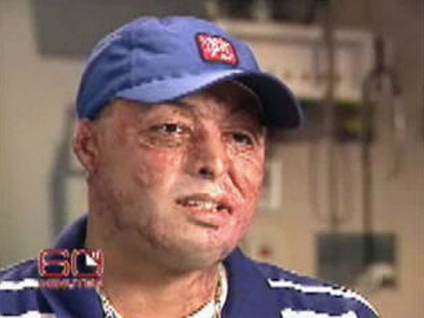 (CBS) In 2003, when CBS News correspondent David Martin spoke with wounded Iraq war veterans, one of those he interviewed was Spc. Jose Martinez. You might also know him as "All My Children" star and reigning "Dancing with the Stars" champion J.R. Martinez.

Martinez was 19 years old when his humvee hit an anti-tank mine in April 2003. He suffered smoke inhalation and burns to more than 40 percent of his body.

Pictures: Martinez on the "Dancing with the Stars" finale
Read more: The long road home from Iraq

"The doctors have told me I've had about 22 surgeries - 22 or 23 surgeries, as far as just skin graphs. I've had broken body parts. Had six eye surgeries. So, I've had a pretty good amount of surgeries, and I'll still have a lot more to go ahead," Martinez said at the time.

He told Martin that be believed he was chosen so that he could use his outgoing personality to help other soldiers deal with the trauma of their burns.

Martinez was cast on "All My Children" in 2008, playing Brot Monroe, an Iraq war veteran injured in combat. He competed on the 13th season of "Dancing with the Stars" in the fall of 2011 and beat out fellow finalists Ricki Lake and Rob Kardashian for the championship.

Watch a clip from the report below: