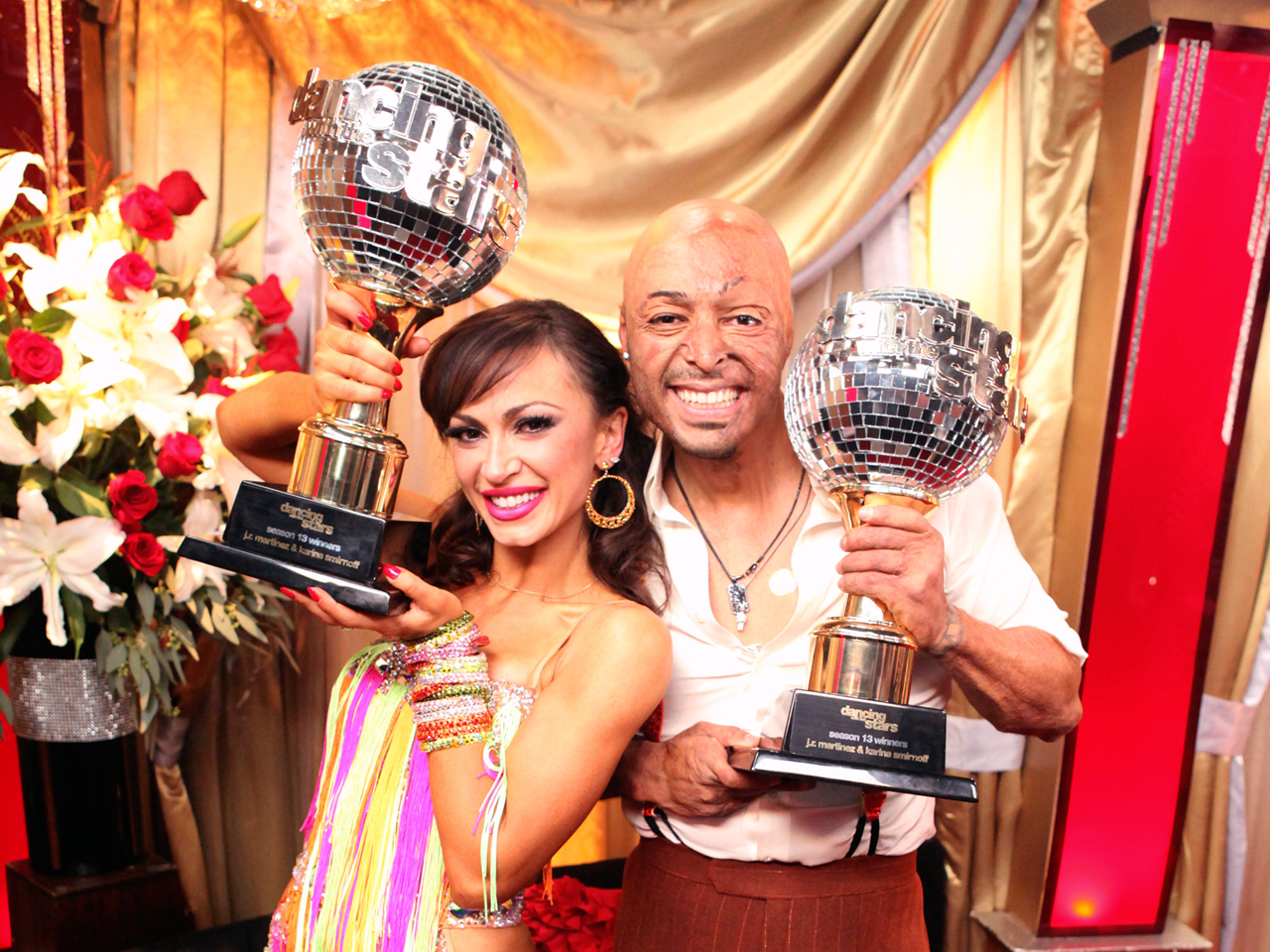 (CBS) There's a certain excitement that comes with the final night of "Dancing with the Stars."

It's part nostalgia (Look! Ron Artest really was a part of this once upon a time!). It's part spectator sport (If Karina Smirnoff doesn't win this time, she'll produce a Cossack sword and chop off Len Goodman's neck!). And it's part self-justification (I KNEW that Rob Kardashian would make it into the final two! I just KNEW it! Now where's my Cossack sword?!).

So here we were, with the three finalists still being required to dance as much as twice more. The sneaky betting suggested that J.R. Martinez - happily, an ABC actor - and his partner Smirnoff, the only professional in the final never to have won, would be clutching that Mirrorball Trophy and singing "Kalinka" at the end of the evening.

This is how it turned out. But that information surely shouldn't have spoiled the 1 hour and 58 minutes of sheer filler and shiller that went before it.

The actual dancing required each pair to offer a reprise of their favorite dance of the season. Ricki Lake and Derek Hough went for their "Psycho" tango. You know, the one where Hough stabs Lake at the end. It was just as dramatic as it had been in its debut. Lake didn't seem to put a foot wrong. Her swoon of death was even convincing.

"This is one of the most memorable dances of this or any other season," said Len Goodman.

"You are a fighter that never gives up," mused Carrie Ann Inaba, in carnal solidarity with the last woman standing.

Rob Kardashian and Cheryl Burke reprised their foxtrot. You know, the one where little Rob wears a black hat with a green band. Unfortunately, just a few seconds into the dance, Kardashian almost lost his hat on Burke's elbow. He stopped to chuckle before continuing one of his better performances. His legs will never be those of a dancer. They are far too uncertain, far too much like a stilt-walker's. But he tried, bless him. He tried, which isn't so easy when your whole family is present.

"You even made that little hiccup look charming," said Bruno Tonioli.

"You've got the best footwork of almost any guy I've seen on this show," exaggerated Goodman.

J.R. Martinez took the risk of doing the jive, one of his weakest performances of the whole competition. Perhaps energized by his freestyle of the previous night, Martinez managed to give it a little more gusto, a little more rhythm, a little more Latino.

"You are such a catalyst for joy," said Inaba.

As for scoring, this would be done on a first to last basis. Kardashian was third, Martinez second and Lake first. This was peculiarly just and sober. Suddenly, with only 45 minutes gone, one star would be eliminated.

Stunningly, it was Lake. Perhaps she's been off TV for too long. Perhaps most of the voters endured serious problems with their eyesockets. Lake was certainly not the third best dancer. To place her below Kardashian was like placing Mozart below Milli Vanilli.

So it was down to Kardashian and Martinez. Surely Smirnoff, whose eyes could taste the prize and whose mouth would surely bite any hand that tried to touch that trophy, would impel her partner over the finish line.

They were charged with preparing an instant samba. In the meantime, we had to watch a whole history of the series. Well, we didn't have to. There was always the DVR to propel us to the finish line.

Who would have voluntarily watched Metta World Peace and Nancy Grace offering so much dancing grace that all we craved was a little peace?

Still, my own DVR paused independently just to catch Kristin Cavallari and Chynna Phillips, both of whom were eliminated far too early. I even thought I saw Carson Kressley twirling with professional Val Chmerkovskiy.

With just 15 minutes left of this bloated extravaganza, Martinez and Smirnoff danced their instant samba. Martinez again struggled to stay behind the music. But he willed his hips and his lips into action, where others might have already faded. Kardashian and Burke followed. The former has managed to find elegance in his arms, while his legs would still look more comfortable beating a drum.

Here, he was desperately trying to take his moves from Burke, which meant that he was always half a beat behind her as he tried to mimic rather than lead. Still, he had a nice bright blue bowling shirt for the occasion.

Tonioli declared that Martinez could turn it on at will. He maintained his obsession with Kardashian's "bonbon."

Absurdly (and predictably) the judges all gave both pairs 10s. Which meant that, no, really, yes, actually, shockingly, staggeringly, Martinez and Smirnoff were announced as the champions.

Smirnoff looked like a golfer who had finally sunk the winning putt in a major after 20 years on tour. She leaped into Martinez' arms and wept with Inaban abandon.

Should your chosen star have not delivered as you would have wished, should you believe that the results were more unfair than the sands of time, please don't worry.

It'll all begin again in March, with new names desperate to regain a little profile. Will Cher compete? What about Glen Beck? That's the joy of this show. You just never know - until you do.