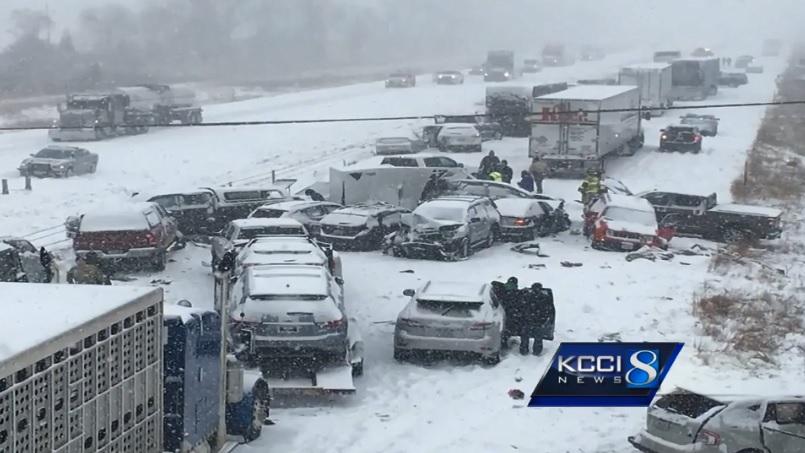 DES MOINES, Iowa -- A tour bus carrying cast and crew members of "Dancing with the Stars: Live! Light Up the Night" was involved in a crash in Iowa, CBS News affiliate KCCI-TV reports. The crash occurred Monday on Interstate 80 while traveling to Ames for a performance at Stephens Auditorium.

Authorities say all cast and crew members are fine. Some sustained minor injuries.

The show was subsequently cancelled. Information regarding rescheduling and refunds was not immediately known.

Meanwhile, dozens of other cars were involved in pile-up crashes across the state on snow-covered freeways.

According to Iowa State Patrol Sgt. Nathan Ludwig, seven people died on Iowa roads. Troopers responded to a total of 185 accidents across the state.

A crash on Interstate 35 involved as many as 70 cars, which authorities say is the worst they've ever seen.

In eastern Iowa, Cedar Rapids police responded to a single-vehicle crash that claimed the lives of two men on Interstate 380. A third man was hospitalized for treatment of serious injuries.

On Interstate 80, police say a person was killed in a crash east of Grinnell, and another person died and two others were injured near Durant.

The majority of the crashes were caused by weather-related conditions, police said.

Snow showers are expected Tuesday before midnight, but total accumulations should be less than one inch.