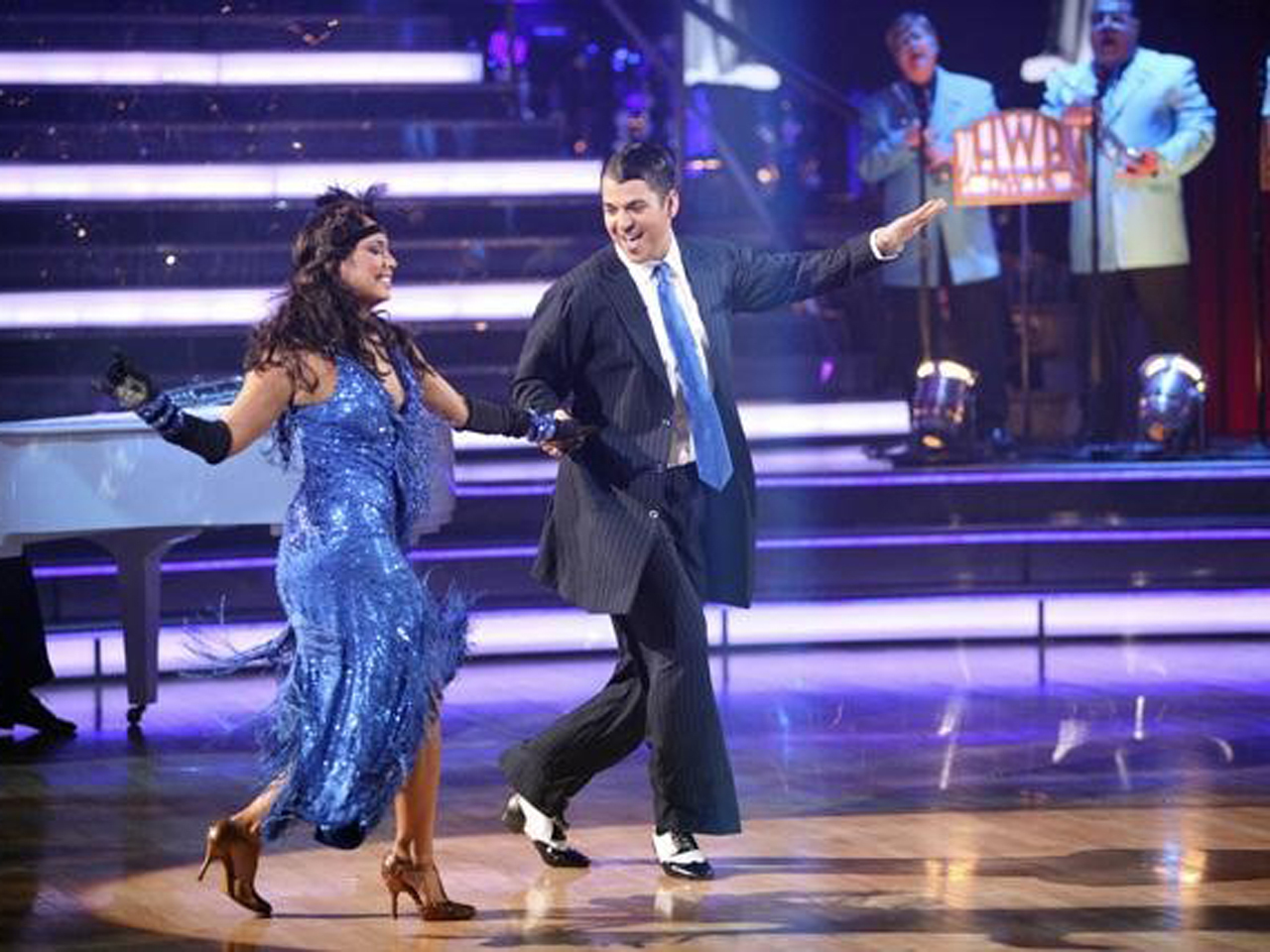 (CBS) Would she scream? Would she shout obscenities? Would she stand up and declare: "It should have been me!" This was the question that burned through most intestines at last night's finals of "Dancing with the Stars."

No, the "she" I am referring to is not Nancy Grace. Nor is it Cher. It is the great former "Dancing with the Stars" contestant, Kim Kardashian, who turned up to offer her little brother Rob a fearsome - if not flying - buttress.

Where previous episodes had been the equivalent of a sloth after a very large bowl of menudo, suddenly we were only given one hour to enjoy the finalists offering two dances - one which they hadn't so far danced in the competition, and the other a vastly unpredictable freelance.

Ricki Lake was given Carrie Ann Inaba to polish her cha-cha. Lake believes she is unable to express sexiness because she is on the larger side of small. Inaba, who still has a dancer's body and a forehead apparently free of Botox, encouraged her to be a vixen.

Lake wore a short red dress with several tassels left over from Hope Solo's trousers of last week. Her technique was precise. Her pouting, while not remotely in the league of Penelope Cruz, at least rivaled that of Carson Kressley. Her hips swayed like the eyes of a drunken sailor. Her finish, though - on her back, naturally - featured a slight stumble.

"Good timing, good rhythm. Hips were working beautifully," began Len Goodman. This before slipping a small nail file into her celebratory cake by suggesting: "It could have been a little more fluid on occasion."

There are those who believe that, when it comes to Rob Kardashian, the fix is in. No, these people don't believe that the oddly large shape of his behind is anything to do with it being injected with cement. Instead, they wonder whether the producers have already decided that he will be the winner.

Such accusations have been leveled before - that some stars will only compete if they are guaranteed at least a place in the finals.

Kardashian has made disturbingly sudden strides toward dancing tolerability and voter likeability. Now here was sister Kim, gracefully glowering from the expensive seats.

Kardashian was asked to waltz, which, given his penchant for imbalance, is like asking sister Kim to teach marriage guidance.

Tonioli was his personal guide, trying to teach him to puff his chest out and wear tight leather shorts. No, I made up the part about the shorts, but Kardashian seemed to access a feeling of being slightly less tight in rehearsals.

He didn't manage so well in the real thing.

His arms had all the fluidity of Pinocchio's nose. At times it seemed as if partner Cheryl Burke was pulling him around like a recalcitrant 6-year-old. His shoulders rose and fell uncertainly like the opinions of an Iowa voter. His feet were more insecure than a Spanish home owner.

So those who thought there was a nasty fix in the air would have been entirely unsurprised when Tonioli declared that he loves Kardashian's continuity of lines. He did, however, concede that there was some messed-up footwork.

But then Inaba gushed: "You're like the male version of Cinderella." A nation's stomach acid suddenly leaped for the exits.

"You had more rise and fall than Pamela Anderson jogging," offered Goodman. This was presumably deemed a good thing. Even Goodman, though, admitted that it was - at times - heavy work.

To score Kardashian the same as Ricki Lake would have been to suggest that black was white, rich was poor and sister Kim was more fetching than Charlize Theron. So that's just what the judges, in their fixed myopia, did.

J.R. Martinez slipped last week. An injured ankle had hampered him, so much so that he got an X-ray. This showed he had an ankle that enjoyed a little swelling. The swelling was not his anklebone. It was just a little inflammation.

Goodman turned up to be his last-minute guide. He focused almost entirely on Martinez' posterior, which has not proved to be as malleable as it might.

Oddly, Martinez still didn't warm to the cha-cha. He seemed strangely stiff, as if willing his legs to go to places and do things that made them suddenly feel like Italian vacationers in Siberia.

While partner Karina Smirnoff - who has never won this competition - strutted her stuff and that of several other frustrated women, Martinez labored.

"People fall in love with your spirit and it's so great," began Inaba. This before adding the great however.

"However, tonight your musicality was little off," she continued. She wasn't fond of his arms either.

"This wasn't that good. You were off time. Your enthusiasm got the better of you," said Goodman.

Much is talked about the freestyle. In recent seasons, though, it has been an excuse to do one of the traditional dances with a few lifts thrown in just to thumb your nose at Inaba - who is obsessed with the "no lifts except in the tango" rule.

Lake came out wearing what seemed like the dead body of an ostrich. She and partner Derek Hough offered a little of this, a little of that, but it was all a little heads buried in the sand, until Hough lifted her into a crab shape and carried her around.

For the finale, he picked her up like a wrestler performing the helicopter spin. He twirled her so many times, seemingly undecided whether to put her down or toss her into the audience that - when she finally touched down - she seemed more disoriented that your average 17-year-old at 2 a.m. on a Friday.

Her fiance almost smiled. At least, his mouth parted to reveal some teeth.

Goodman was largely complementary. Tonioli said: "That was the most demanding of dances because you put two dances at the opposite end of the spectrum together - the salsa and the quickstep."

Kardashian and Burke began with a Cotton Club slow thing, which then progressed into Kardashian waggling his behind toward the camera for a good 10 seconds.

Well, it would have been a good 10 seconds if you like that kind of thing. For me, it was a very tough 10 seconds indeed.

Things sped up after that. Or did it just seem that way? He also went for the wrestler's helicopter spin, which was far less elegant than Lake and Hough's.

Kim Kardashian - with her hair greased back like Antonio Banderas in his finest period and a bow tie sparkling beneath her gentle neck - stood to applaud with the remainder of her family, all wearing tuxedos.

Inaba claimed that to get a 10 she would have to be blown away. Shockingly, she then claimed she was blown away.

Even Goodman said he loved it. At this point the fix-claimers had swallowed their hearts and were simultaneously calling their cardiologists and their psychologists.

The three 10s Kardashian received were at least four too many. This would have been risible if it had actually made anyone laugh.

As everyone else in the audience sat, the Kardashian clan rose as one to applaud, high five and get on their cell phones to offer exclusive interviews. I might just be mistaken about that last part.

Smirnoff, partner to Martinez, wanted to do a lift in which he hooked her neck. This seemed a little wishful, as Smirnoff has already endured serious surgery on her neck. In final rehearsal, Smirnoff began to panic, to weep and to generally perturb anyone watching.

Theirs was a salsa-inspired piece, with a little hip-hopping thrown in, just in case someone under 45 had switched to the wrong channel or supped a little too much Bacardi Breezer.

This was clearly the most enjoyable of the freestyles, even if Martinez was still a slave to the lack of rhythm.

Inaba described the lifts as "the sickest lifts I've ever seen."

"You were wild, exuberant, with animal physicality," began Tonioli. Oh, you can guess the rest.

But this was just the first part of the finals. Tuesday, they all dance again.

Still, currently Rob Kardashian is in the lead, which is patently ridiculous. That is possibly the first time that phrase has ever been used in association with any member of the Kardashian family.

Who will win "Dancing with the Stars"? Vote in our poll, share your thoughts in the comments and come back here tomorrow for post-finale analysis.