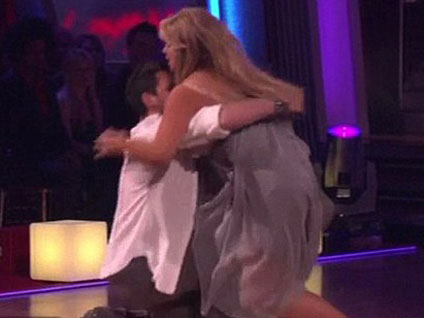 (CBS) It's easy to tell a personal story over a beer. Well, after the first three. But it's a little harder when you have dance as your medium.

That was the task facing the sort-of-stars during last night's "Dancing with the Stars" show. Some brought tears to the eyes, and others brought their bodies to the floor.

Here they were, in chapter order:

1. Wendy Williams last week declared she wanted to keep her breasts intact. After this performance, she may be more worried about keeping her place on the show intact. Her story was about her radio ambitions and the struggles she went through. Sadly, some might feel this performance was, as head judge Len Goodman said, better suited to radio. Williams walked as much as she danced. This was less a foxtrot and more a foxstroll.

2. Chelsea Kane chose to a dance to a song that had been written about her - not many people can do that. Kane doesn't consider herself sexy. Yet, there she was having to, well, act, which, even for a Disney star, shouldn't be too difficult. Indeed, her cha-cha was a thing of such natural exuberance that even the crusty old critical judges had to get excited. The more one looks at Kane, the more one sees Cameron Diaz' little sister, with the most extraordinarily professional arm extensions.

3. Wrestler Chris Jericho danced to "Let It Be," a song that reminded him of his dead mother. His rumba was meaningful and yet his partner, Cheryl Burke, seemed to do a little more of the actual dancing. Jericho posed a little more than he moved, which meant that the dance seemed to go from one set piece to another, rather than offering a flowing series of movements.

5. Rapper and actor Romeo danced to "I'll Be There," a song that reminds him of the death of two very young cousins. Again, the rumba was used to evoke loss, rather than lust. It's hard for a neophyte dancer to convey sadness in a dance normally so dependent on sexy hip movements. There was a certain stiffness to some of his lines and only head judge Len Goodman had the courage to tell Romeo that he had taken "a huge step back."

6. The evening was in danger of becoming extremely down-beaten until Pittsburgh Steelers' Hines Ward presented his samba. Ward told the story of how his Korean mother worked four jobs just to get custody of her child. But his samba was an utter celebration of success - mostly fluid, mostly fluent and utterly absorbing. His partner, the glorious Kym Johnson, last week confessed to an obsession about Ward's butt position. This samba showed a considerable level of butt control, though Ward still occasionally has shoulders that believe they are dancing in pads.

7. Petra Nemcova again chose a song whose roots were in sadness. "You Raise Me Up" was all about offering hope after the disaster of the Thai tsunami, in which she lost her fiance. In an almost surreal juxtaposition to last week, Nemcova showed a remarkable fluidity of movement, offering elegance, and a peculiar confidence. When she was offered a score of 9 by the most grisly of judges, Len Goodman, Nemcova skipped into the air, as if she believed every word of her chosen song.

8. Sugar Ray Leonard wanted to prove he could beat the odds. His song was Bobby Brown's "My Prerogative," to which he had to perform the paso doble. His partner, Anna Trebunskaya, was angry with him during rehearsals. "Spread your legs," she ordered him. The real thing turned out to be a boxing-inspired paso doble, with Leonard beginning the dance wearing red pugilist's gloves. Regretfully, Leonard's dancing feet resembled boxer Chuck Wepner's rather more than Fred Astaire's. Somehow, he took the leg-spreading order a little too literally and, more often than not, he simply swiveled his torso in order to order his leg into the next position.

9. Kirstie Alley was another to tell a sad story - her mother's death in car accident, which happened at the same time as Alley was getting her big acting break. She wanted to show both the agony and the ecstasy in her rumba. Unfortunately, the agony is what most will recall. Alley rumbaed for but a couple of seconds, then tumbled (watch the video here). Her partner, Maksim Chmerkovskiy, fell first, grimacing in pain as he tried to get up to continue. Both he and Alley managed to regain their composure, with Alley again offering deceptive bodily fluidity. After the performance, Chmerkovskiy explained that his thigh had given out - or perhaps given in. If only they'd explained that the fall was part of the dance, they might have scored higher.

10. Ralph Macchio has, perhaps, been the revelation of this competition. Yet his rumba, while pleasant, offered a dearth of hip action and curiously resembled the stretching movements of athletes in the very early Greek Olympics. Some might feel the judges were a little harsh on Macchio. But this was just a little too stilted to be winning.

Be sure to check back here tomorrow for elimination results.