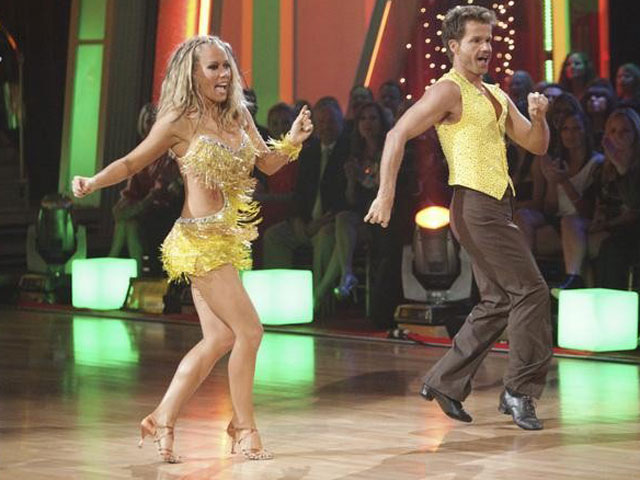 (CBS) Last night, the remaining starry-legged pretenders in "Dancing with the Stars" had to admit to guilty pleasures. How honest would they be? How guilty would they feel about their choices? Or would these be producer's choices that were supposed to make the stars feel guilty?

Kirstie Alley was in the confessional first, together with her newly-shaved partner, Maksim Chmerkovskiy. Alley's guilty pleasure was Britney Spears' "Hit Me Baby One More Time." Yes, that perfect samba tune.

In rehearsals, Alley was panicking. You could tell because she said, in a panicky voice: "I'm not panicking." Chmerkovskiy worked hard on her psychology. Like any other shrink, he had Alley prostrate on his lap as he did.

Costumed in a curious brown, Alley seemed very unsure of how to make her arms look sexy. They waved in midair, as if they had suffered the same sort of guilty puncture recently experienced by a Southwest Airlines 737. However, as the dance continued, Chmerkovskiy's psychiatric skills showed their influence. Alley's hips began to describe pleasing ovals.

The judges offered absolution. "Right up my alley," said King of the CrustFest, Len Goodman. Then he offered her a 9. Alley poured praise on her professional partner. "He doesn't treat me like I'm my age." No good psychologist ever does.

Next was Chris Jericho. Sadly, he (or the producers) stole a song that has already been permanently stolen by the World Series champions San Francisco Giants, who had mugged the Sopranos in a dark alley for its possession. Yes, Journey's "Don't Stop Believin'."

In this show, where any song can be any dance, Steve Perry's classic turned into a tango. Though he keeps his shoulders rigid, there's something terribly soft about Jericho's dancing. He moved like a 7-year-old who had smashed the neighbor's window with a teddy bear.

"You lost timing so many times. You were not able to perform after that," said judge Bruno Tonioli. "Cold, uneventful and lumpy," he concluded. Carrie Ann Inaba theorized that the pressure got to him. Goodman, oddly, defended Jericho's assaulted walls. The wrestler spoke afterwards as if he would be back next week. This is touching optimism.

Rapper and actor Romeo claimed his guilty pleasure was Celine Dion's "My Heart Will Go On." Was this shameless pandering to the nice old ladies who vote on this show? Most surely. Perhaps Romeo's agent is working overtime.

His waltz began with his partner, Chelsie Hightower cradled in his arms. From then on, Romeo tried to hide his rapper roots in a wrapper that melded Dion with DiCaprio with just the skirts of "Die Hard" showing. His legwork was, at times, a little unsure. On one backward sweep, one feared that he would drop off the back of the Titanic. Still, his acting skills managed to mask any technical deficiencies in his frame. This was a boy from hood, for the second week, persuading America that he was mature, sophisticated and entirely family-friendly.

"Magic happens," declared Inaba, just before offering him a 10. Will this go to his head? It did immediately. He demanded a kiss from normally static presenter Brooke Burke. Oh, dear.

While most of these supposed stars try so hard that their straining is obvious and difficult on the eye, dizzy Disney personality Chelsea Kane makes it all seem effortless. In a quickstep to "Walking on Sunshine," Kane wafted around the dance floor, as if she had been dancing since Tom Bergeron began presenting America's funniest, scariest, most embarrassingly nonsensical videos of dogs and children.

No move seemed forced. No leap seemed anything other than choreographed for maximum effect. Inaba decided that magic happens twice and offered another 10.

Only afterwards was it revealed that Kane's professional partner, Mark Ballas, had twisted his ankle in dress rehearsal. Rather than having his foot amputated, he accessed his competitive will and dragged it out to the dance floor in order to preserve Kane's quest for immortality. The guilty secret all of these people hold close to their sometimes waxed chests is that there's nothing they won't do to win.

Next was resident diva Kendra Wilkinson. Her eternally patient psychologist, Louis Van Amstel, explained to her that, for this samba, she would have to shake everything that God gave her. "Including my boobs?" she wanted to know, so innocently. But, of course - Van Amstel replied.

"But my boobs aren't what God gave me," offered Wilkinson in a surely scripted attempt to gain viewers' affection. Kendra has not endeared herself to the viewers. Her temperamental posturing has been rather stronger than her dance floor posture.

In rehearsals, Van Amstel declared that she was "half-assed." So what could bring her to fullness? Yes, she was persuaded to let her hair down. Literally. Gosh, that's some psychological insight.

Within 20 seconds of her performance, Wilkinson waggled her breasts with the ferocity of a Super Bowl-winning lineman. Her footwork was still lacking. Her posture was imperfect. But then, at the end of her dance, she climbed the judges' table and wobbled her bottom, as if an 8.0 had struck the theater.

"That was a guilty pleasure, my dear," said Inaba. Tonioli became so excited that he leaped from his chair in order to express his excitement, in a spread-legged manner that some might have revealed a little too much guilty pleasure.

Wilkinson scored well with the judges. Somewhere, Ricky Martin, whose "Livin' La Vida Loca" was the background to Wilkinson's waggling, wobbling and wooing, was smiling and lifting his eyes heavenwards.

Pittsburgh Steeler Hines Ward believes he's not romantic. So here he was, confronted with the demon of a waltz to Boys II Men's "End of the Road." Ward's body control is a little different from Wilkinson's. Where she thrust out her protruberances and shook them with the vigor of a kitchen blender, Ward's moves were butter.

Goodman and Tonioli largely gushed. Inaba tried to find a foot fault. But this was a sophistication not always associated with Pittsburgh.

We were then left with "Karate Kid" actor Ralph Macchio, who has been slipping in recent weeks. Little did he know what slippage he was about to encounter. In preparation for the paso doble, partner Karina Smirnoff was worried that Macchio's arms had all the sexiness of a Google employee.

Macchio, seemingly the nicest of the contestants, was supposed to offer meanness. Yet the gods were paso-doubly mean to him when Smirnoff slipped and fell. For quite a few seconds, both of them were utterly discombobulated. But they fought back, with Macchio attempting to turn his face into that of a serial killer.

Goodman, sensibly (for once), noted that it was Macchio who pulled Smirnoff up off the floor, like a husband rescuing his drunken wife at a particularly merry anniversary party. "I started to feel the fire," said Tonioli.

Replays showed that Smirnoff had tripped on Macchio's long coattails. Smirnoff admitted that she had panicked and thanked Macchio for saving her. He was not guilty. Surely this will gain some voter sympathy.

But, for your ultimate guilty pleasure, in Tuesday's results show, you can witness Pia Toscano singing live. Yes, she from "American Idol." Yes, she who is allegedly enjoying innocent pleasures with Mark Ballas.

Now that is guilty must-see television.