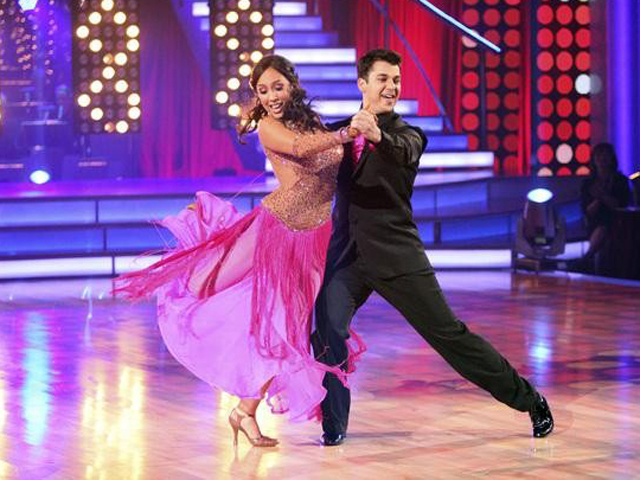 (CBS) Four brave, injured animals limped toward the finish line in the hope that glory would be theirs. Whose limbs would hold out? Whose sad story would soften the hunters' feelings? Who would be left in the jungle to fend for themselves?

Yes, this was the semi-finals of "Dancing with the Stars," a show in which pain outweighs pleasure and endurance outweighs joy.

"I don't complain about it much because it's part of my life now," said Hope Solo, on revealing that half of her consists of old car parts. Her shoulder consists of recycled spark plugs, welded together to help her keep goal.

Her doctor turned up at rehearsals to give her an injection. Which made for wonderful reality television. It also made for convenience, as "Dancing with the Stars," like baseball for so long, doesn't perform drug tests. So who will ever know what all these artists are truly driven by?

Solo's paso doble was an act of will, in which her inner aggression became very outer, like a nervous member of the NYPD encountering Occupy Wall Street. It was, however, not appreciated by the judges.

"Because you had so much attack, you lost control and finesse," said Len Goodman.

J.R. Martinez was also limping. His groin was strained. His ankle was wrecked. Even his partner, Karina Smirnoff, seemed to be suffering. But she's Russian. She's used to it.

Dressed as a kind of bisexual Zorro, with almost as many sequins as ruffles, Martinez found just the right moves and - even more importantly - lips of sheer ruthlessness. Again, this was a paso doble of effort, but not style.

"Dressed up, ready kill, it was very, very good," said Tonioli. But he worried about Martinez' posture. The ankle was, clearly, the problem.

"It was more zero than Zorro," insisted Goodman, who found Martinez insufficiently dominant.

Rob Kardashian knows about dominance. Sometimes, it seems as if the women in his life dominate him to the degree that he is their manservant.

His partner, the veteran taskmistress Cheryl Burke, believed in Kardashian's strength. He, in turn, believed that the challenge was to seem more masculine that the Iraqi war hero who had danced before him.

If the butt fits, you must admit--that Kardashian can be wonderful. Somehow, somewhere, he found hips that suddenly functioned with sexual purpose. He found leg movements that seemed free of any arthritic tendencies. Still, when he stretched his arms up in the samba, he still looked like a hula dancer recovering from surgery.

Kardashian believed that his butt was his best asset here, and he tried so very hard to butt his way into the reckoning.

"Who are you? What was that?" said Inaba. She added words like "fluid" and "fantastic."

"That's how you turn a handicap into an asset," said Tonioli. He was not talking about Kardashian's hands. Rather, the second to last syllable was the one that occupied the lively judge's feelings.

"This is such a fleeting moment in both of our lives," said Ricki Lake to her partner, Derek Hough, in a moment of understatement. She talked of her weight issues. She was afraid of breaking Hough during the Argentine tango. Hough explained that Lake thought she weighed 200 lbs. She does not.

For their samba, they came out in a very light yellow. Lake gave it every piece of Latina spirit and gesture that she'd seen in every single Jennifer Lopez performance. She pursed her lips more often than a drag queen and made her limbs flow like the Amazon on a breezy day.

Tonioli was dazzled by her sunshine. Inaba couldn't stop raving. The 10s flowed like tears.

Suddenly, we were into extreme drama. Solo told of her family troubles, her Dad kidnapping her and her brother and then being arrested. She had something of a rapprochement with her Dad, but also suffered from depression. Was this really a story for a dancing show? Especially as, moments later, she was draped over the judges' table with vast provocation, wearing lacy tights and a very short skirt.

Her Argentine tango reeked of pain, angst and vast athleticism. One moment she was on the floor, the next Chmerkovskiy was lifting her, rolling her up himself and turning her upright. Ah, this was symbolic of her life story.

"I thought it was far, far better than the paso doble," sad Goodman. "It was like a buffet of tasty morsels."

"You were sexy. You were really into Maks," said Tonioli. Who isn't? Well, other than Inaba.

She was critical. She disliked the ins to the lifts and outs from them. Chmerkovskiy offered a knowing smile, suggesting he thought Inaba was full of her own lifted ego. She didn't like it.

Solo was cheerily defensive. She insisted she was finally happy with her partner. That is a rare feeling.

As if it were some strange competition of pain, we listened again - and in even more detail - to the difficult life history of Martinez. How could Kardashian compete with this?

Martinez tried to access his inner cruel lover for the tango. But it's hard to be cruel with Karina Smirnoff as your partner. She can take your cruelty and raise it. This was soft-core rough sex.

"Where did you go? Ankles-R-Us?" asked Tom Bergeron.

"It was so charged," burred Tonioli.

Inaba adored the mounts and dismounts. Goodman just adored the whole thing. And yet the 10s were not forthcoming.

"I haven't really experienced life like everybody else," said Kardashian. He had no painful story to tell. And yet, his sweet, loving mother, Morticia, offered that the death of Kardashian's father, Robert, was a terribly troubling moment.

This is a dancing show. Really. A dancing show with half-stars and full professionals. They're already hurting physically. Must we hear about all this emotional pain too?

When it came to the tango, Kardashian just couldn't look mean. He tried. But instead, he proved to be a decent foil for the beautiful moves of partner and controller Cheryl Burke.

"There's no way to fake good dancing," insisted Inaba. Some might say you simply get yourself a good lawyer.

Now here she has Hough taking her into his own hands on prime time television and she didn't put a foot wrong. At least that's how it seemed.

"Ricki, I don't think you know how good that was," said Goodman, just a touch patronizingly.

Tonioli thought this was a scene from the Buenos Aires underworld. Without the drugs, the guns and soccer shirts. Inaba seemed a little muted in her praise.

Finally, a groupy cha-cha. Each pair would have to dance one section. Chmerkovskiy was worried. He was really worried.

Everyone was worried. Great editing really brings out the worrying.

Lake came out strong and stayed strong. Solo's cha-cha pants did as much dancing as she did. Martinez kept it straight, as his ankle bent crooked. Kardashian accessed his inner lady. He danced by numbers at times, but that's almost become his signature, as if this might be a new form of dancing posture.

Indeed, the judges loved his moves most. But who will the old ladies at home prefer? The person whose story was the saddest? Surely not the person who danced best.

BEST ONE: RICKI LAKE
BOTTOM ONE: NOT ROB KARDASHIAN, BUT HOPE SOLO.