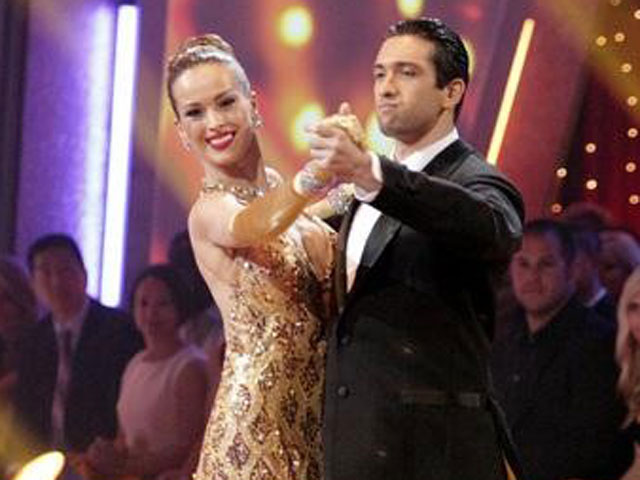 (CBS) If you don't have much of a franchise going in to "Dancing with the Stars," you have to make an immediate impact in order to gain that franchise.

So when model Petra Nemcova was told she would have no chance of putting the mirrorball on her mantel during last night's results show, it didn't reveal that her performance had been the worst on "America Night."

It offered far more that the predominantly female voters didn't really know who she was before the show and didn't find her dancing - or her personality - exceptional enough to compensate for that.

Perhaps the most hopeful moment of last night's show came when professionals Maksim Chemerkovskiy and Lacey Schwimmer danced in their cowboy boots, while Toby Keith reaffirmed his cowboy foreigner-booting credentials.

Professional routines are supposed to look perfect. But here were Chmerkovskiy and Schwimmer, two of the most engaging professionals, in a complete tangle as Schwimmer tried to get between the Ukrainian's legs (I think), while he assumed she was going to do something entirely different. He almost trod on her, as if he had managed to carry his consistently interesting disasters with Kirstie Alley on to his professional partners.

Such a misstep would have given even the truly worst dancer Monday night, Kendra Wilkinson, hope.

The early part of results shows rely on backstage footage for entertainment. So one wonders just how much the ABC producers disliked Wilkinson when they showed her more irritable, self-absorbed, delusional moments last week.

One also wonders just what the producers won't do to scrape just another rating or two. Chelsea Kane displayed her posterior for a close-up wiggle after judge Len Goodman had referred to it as "Yum, Yum, what a bum." One assumes he was referring to her posterior rather than that of partner Mark Ballas.

As if needing to allow viewers ever more into the personal lives, habits and bodies of the performers, the producers displayed footage of Hines Ward passing wind while clutching partner Kym Johnson. They then showed Chelsie Hightower rehearsing with Romeo when two spongy elements appeared to fall from beneath her sweater onto the dance floor. Romeo referred to these items as "mechanical bam-bams." I will leave you to conclude just how mechanical they are.

Now that they had beads of sweat dripping from viewers' eyebrows, the producers followed this masterpiece of intimacy with footage of Maksim Chmerkovskiy describing himself (to Kirstie Alley) as sex on a stick or, to use his words: "a stick that's been dipped in a boiling pot of sex."

As usual, there was an attempt to display a modicum of tension - about as convincing as Hightower's mechanical bam-bams.

But first, the dirty talk kept on coming. Even Ralph Macchio, on hearing that judge Bruno Tonioli wanted "sex" and "fire down below," responded with thespian wit and hurt.

"I have two kids from my fire down below, what does Bruno have?" Macchio said.

What Nemcova has are some cheery memories, but not the personality or dance skills to spike ratings. Perhaps she should have talked dirty. On being told she was going home, she offered that this had been a "life-changing experience." She had feared that her performance had been the worst.

And here is your ratings-grabbing highlight for next week: Mark Ballas will be dancing while his perhaps, maybe, possibly new squeeze, "American Idol" castoff, Pia Toscano, will be singing.

The TV business is tough. You have to try everything (or not). So surely at least one of the couples will be subject to a rumor in the coming week that they are steamily involved. I feel sure, though, that this will not be Wilkinson and her partner, the inordinately patient Louis Van Amstel.