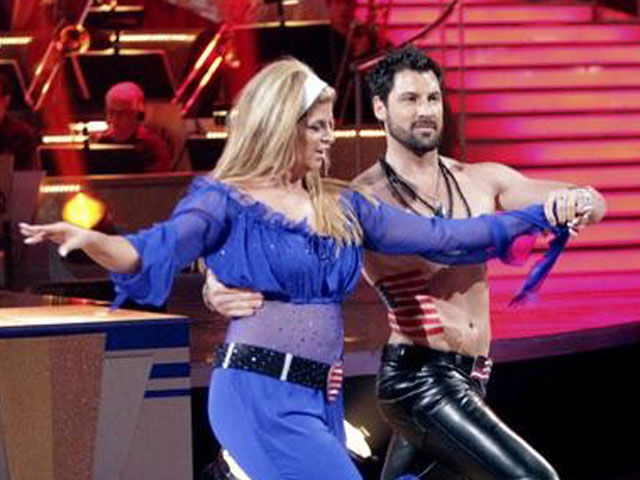 (CBS) This week on "Dancing with the Stars" was "America Night." So the contestants, at least in some cases, had to work out how to take some classics of American song and turn them into some strange foreign dance. Would this generate a coalition of the willing, or would it look like your average snoozy session at the United Nations?

First was Ralph Macchio dancing that great American jig - the samba. Presenter Tom Bergeron explained that everything was being outsourced these days. As a nod to the new world order, Macchio was dancing with a Ukrainian, Karina Smirnoff - to "Sweet Home Alabama." Well, what would you expect from a "Karate Kid" actor?

It was a samba with a covering of line dance. Macchio tried to work his hips - this wasn't so easy for a 49-year-old. The judges weren't happy. Len Goodman, an Englishman, offered miserable criticism. Bruno Tonioli, an Italian, demanded, "Give me more sex," and it's so rare to hear an Italian make such a demand. The lone American judge, Carrie Ann Inaba wanted to deport them both.

Next, in another cheery expression of American world domination, we had wrestler Chris Jericho dancing the Viennese waltz. Jericho has an interesting impression of Goodman, his version making the Englishman sound like a tramp from a sitcom, which is not entirely inaccurate. Jericho and partner Cheryl Burke had to dance their waltz to "America the Beautiful." Jericho's arm movements were less than beautiful, resembling those of a woodcutter trying to lift a particularly heavy tree trunk. His feet were also slightly lumberjackish.

Oddly, the judges largely praised his technique. Although Goodman, who charmingly (for a tramp from a sitcom) praised Burke for revealing her "Rocky Mountains," did tell Jericho he was flat-footed.

Petra Nemcova grew up in the communist Czech Republic. So what greater sense of liberation could there be than dancing to Elvis and his "Viva Las Vegas"? Her quickstep offered a remarkable level of self-assurance. Indeed, even for a quickstep, this was very, very fast choreography, as if it had been constructed in Elvis' later, speedier period.

Nemcova, despite her modeling past, still doesn't connect with the audience as well as some. Inaba pointed out missteps. Goodman waffled. Tonioli, however, understood the difficulty and offered praise. You can tell when Tonioli is offering praise. He stands up.

Romeo and Frank Sinatra are like cheese and horsemeat. So the young rapper would have to make us believe that Mia Farrow would have found him attractive. He tried. He really did try. But, in his foxtrot, his legs seemed inordinately weak, as if he was having trouble lifting them from the floor.

Still, the judges loved it, which made one think that they had been watching a little too much of the forgiving Steven Tyler and Jennifer Lopez on "American Idol." Romeo, on witnessing quite unreal scores from the judges, said that God worked in mysterious ways. Indeed.

Hines Ward had to be taught by his Australian partner, Kym Johnson, to offer something Americans find more difficult than the violence of the NFL - sex. Ward and Johnson were performing another American classic dance, the rumba. So Ward dressed as a sailor, while a singer intoned another enticingly patriotic song: "Proud to be an American."

Carrie Ann Inaba told him he made it seem so easy. Even Goodman told Ward this was his best dance. This was a little hard to understand, as the Pittsburgh Steeler still has a few metallic movements to smooth out.

Kirstie Alley, she of the falling partner and slipping shoe, called in a dance doctor during her rehearsals. She could leave nothing to dancing chance. She wanted to be the front-runner. So, perhaps pulling on a Scientological string, she managed to secure the services of that legend of American movement, John Travolta.

Travolta sauntered in, told her not to wear Manolos because they were too fancy, too fragile. He feverishly demanded romantic tension between Alley and her partner, Maksim Chmerkovskiy. Perhaps his most important advice was to explain to the Ukrainian Chmerkovskiy that it was no use telling Alley that he loved her using his native tongue. This was American week, after all.

In order to ratchet up the sexual quotient in this foxtrot, Alley danced topless. No, wait, that was Chmerkovskiy. With a large American flag emblazoned on his ribs, Chmerkovskiy led Alley to a level of raunchiness that you might see in a Montana saloon late on a Friday night. The judges, like America, were divided. Inaba decided this was crazy, but also Alley's best dance. Goodman brought out his cliché about this level of loud raunch (especially in a foxtrot) not being his "cup of tea." Tonioli seemed to merely want Travolta's phone number.

For myself, I thought it was rather exuberantly entertaining, although I missed some level of disaster.

What could be more American than the story of Kendra Wilkinson? The story of a girl from nowhere who takes her clothes off, becomes a reality star and makes bucketloads of money. Wilkinson is one angry woman. She accused Inaba of treating her like trash. And that was last week, when it was suggested that Wilkinson was afraid of elegance.

This week, the former Playboy person decided to play along. She cast her extreme sensitivity aside for the cause. She was going to show America that, in her Yankee Doodling foxtrot, she wasn't the nasty, elegance-free, trashy American. No, Kendra is classy. Kendra's was the 1000th competitive dance on "Dancing with the Stars." Some might have been forgiven for thinking they had stumbled into a circus. Wilkinson does stumble her way through most dances, at least mentally. She looks as if she's a sixth grader trying to solve a math problem, her forehead constantly frowning.

Inaba tried to be additionally pleasant in her comments and score. Wilkinson explained again that her negative reaction last week had been down to the time of her month. It's hard to believe she's having the time of her life, however.

Chelsea Kane, Disney star, wasn't sure she was allowed to use the word "ass," as she referred to the part of herself she was going to work off. Still, on hearing that she would be dancing to Miley Cyrus' "Party in the USA," she told partner Mark Ballas that she was ready to break every rule for this dance. You just knew what the Gargoyle Goodman would think of that. So Ballas surprised her by deciding that this would be a traditional samba. In rehearsals, Kane limited her lexicon to such phrases as "frickin' A."

Kane is the only contestant who has natural and precise arm movements and Ballas made sure those arms took the eye. The secret is that Kane is the best dancer in this competition. But she's not the most famous, so she still might have considerable trouble on her way. The judges, even Goodman, got into the party spirit, but would the voters? Ah, American democracy. It can be such a nuisance.