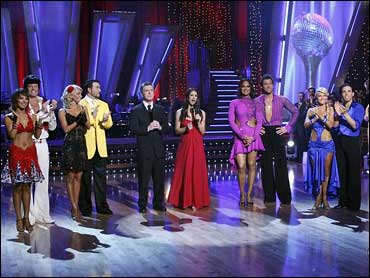 He earned a perfect score and glowing praise from the judges. But that wasn't enough to keep Ian Ziering on "Dancing With the Stars."

The 43-year-old actor was booted from the ABC dance-off Tuesday during the competition's semifinal round.

"We're in it to win it," the "Beverly Hills 90210" alum said before his performance Monday. "This week you're going to see a whole new Ian Ziering on the dance floor."

Judge Len Goodman seemed to think so, praising Ziering's tango as "your best dance ever" and calling him "technically ... the soundest of all the celebrity dancers." He earned a perfect score of 30.

But in a second dance, he earned a score of just 28, bringing his total score for the week to 58. Even though it was just two points less than perfect, it was the lowest of the week. Judges' scores are combined with viewer votes to determine which couple is eliminated.

Ziering said it was "truly a victory" to get a perfect score on Monday and credited his professional partner, two-time champion Cheryl Burke.

"Cheryl, it means so much to be in this competition with you and to have gotten this far," he said. "I've accomplished my goal. I've learned how to dance. I feel like a big winner just doing that."

Tuesday's results show also included the fast footwork of flamenco dancer Joaquin Cortes and a performance by Enrique Iglesias, who sang the single from his forthcoming album, "Insomniac."

The three remaining celebrity dancers — Laila Ali, Joey Fatone and Apolo Anton Ohno — begin the competition's final round on Monday, when they will perform a dance chosen by the judges as well as a "freestyle" dance.

The new "Dancing With the Stars" champion will be named on May 22.
By Sandy Cohen