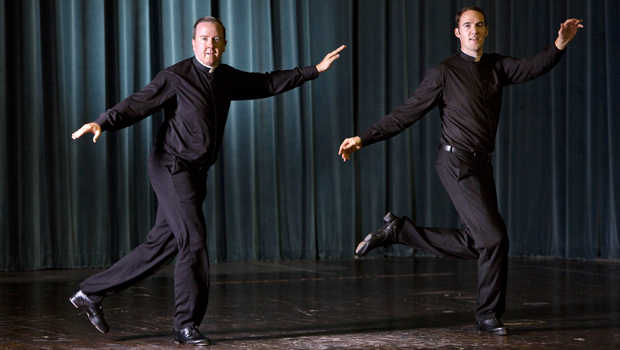 ROME -- A video of a pair of dueling, dancing American priests studying in Rome has gone viral, following in the footsteps of a now-famous Italian nun whose Alicia Keys-esque voice won her a singing contest and a record contract.

The Rev. David Rider, 29, of Hyde Park, New York, and the Rev. John Gibson, 28, of Milwaukee, first shot to Internet fame when they were filmed in April during a fundraiser at the North American College, the elite American seminary up the hill from the Vatican.

Rider warmed up the crowd with a lively tap-dance routine, only to be pushed aside by Gibson's fast-footed Irish dance. Soon they were battling it out, trying to impress the crowd.

At the back of the room, journalist Joan Lewis recorded the event and later posted on YouTube.

"All of a sudden the numbers started rising and rising," Lewis told The Associated Press. The video has nearly 260,000 views.

Their Internet success has drawn comparisons to Sr. Cristina Scuccia, who won the Italian edition of "The Voice" in June with a series of unadorned pop song performances, in full habit. Her first album features a cover of Madonna's "Like a Virgin."

As with Scuccia, the priests' online popularity was tinged with criticism. Some commentators wrote that the priests shouldn't have been dancing under a crucifix and a painting of Pope Francis, calling it "disrespectful."

"We would just refer them to the Bible," Rider says, "where the Lord tells us to live with joy."