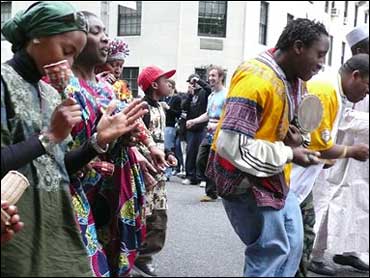 Thousands of demonstrators shimmied down Broadway in the rain in an extravagant, ecstatic protest against the city's 80-year-old cabaret laws, which ban dancing in eating and drinking establishments that lack special licenses.

The protesters want the city to repeal the ban, which the state Supreme Court's Appellate Division upheld in February in a ruling against the Gotham West Coast Swing Club and several other plaintiffs.

New York's restrictive dance laws have been on the books since 1926, at the height of the Jazz Age, when they were passed in part to stop interracial public dancing while enforcing a Prohibition-era definition of "public lewdness."

To this day in New York's five boroughs, it is illegal to get up and move your body to a rhythm in any locale where three or more people congregate and food or drink is served — unless the business obtains a dance license.

Fewer than 150 of the city's 5,000 venues with liquor licenses have the dance permits, according to Metropolis in Motion, a grass-roots group that spearheaded the dance parade.

The parade started in the early afternoon near Macy's, with participants clad in bright colors dancing their way down a traffic-free Broadway. The dancing frenzy wound up about two hours later by the white stone arch at the bottom of Fifth Avenue in Washington Square Park.

Participants from toddlers to stooped, elderly women danced in nearly 50 styles, including a Brazilian group and a troupe from Cameroon. It was a rain-or-shine spectacle, with people flashing plenty of bare skin despite the raw weather — no deterrent to beaming spectators lining the route.