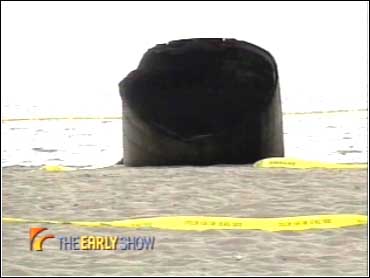 A Boeing 747 made an emergency landing after losing several aircraft pieces - including a dishwasher-sized engine part - shortly after takeoff, officials said.

Passengers told CBS station KCBS-TV they knew something was wrong when they heard the loud explosion, despite reassurances from flight crew.

Soon after the loud explosion, passengers say the pilot announced he was dropping fuel to land at LAX.

"There was a great big noise in the bottom of the plane and they told us it was normal," said passenger Francoise Arjaans. "It was a tremendous noise, it was a horrible noise, it was very frightening."

Another passenger, Scott Young, who was on the right side of the plane said he smelled smoke after the explosion.

"Then someone came up and said that's normal. And I was like, 'I don't think that's normal,'" he said. "There was no loss of control or anything, it was just like something blew out, and then I smelled smoke, you know, like that electrical wiring smell. It wasn't cool. I wasn't happy."

Air traffic controllers saw part of the exhaust of one engine fall to the ground and warned the pilot, who was feeling vibrations from the damaged engine, said KLM spokesman Hugo Baas.

The pilot of Flight 602 shut down the engine and dumped 83 tons of fuel to reduce the weight below the maximum allowed for an emergency landing, Baas said. The plane returned safely to Los Angeles one hour and 40 minutes after takeoff.

Investigators found damage to the front of the egine and to the engine blades, leading them to conclude the plane hit a bird which must have been larger than a sea gull, Baas said.

"A bird hit the first row of blades and it tore him up and blew off the trailing edge of the cowling," said Joe Hicks, supervisor of air field operations at the airport. "Those blades became unbalanced and banged into other pieces, and those pieces went into the engine compartment."

Officials from the U.S. National Transportation Safety Board were investigation, but Baas said, "we don't expect to find any structural problem with the aircraft" to have caused the incident.

Richard Parker, an NTSB investigator, said one of the pieces, about the size of a dishwasher, was an exhaust nozzle from one of the four engines.

The passengers were put up overnight in hotels and were to take other flights Monday. Many badly shaken applauded once the plane landed.

"It was really scary," Kianoosh Kamali, who was being pushed in a wheelchair, told a television reporter.

Janet Anderson was just relieved that it was over.

"The pilot did a superb job as did the crew," she said. "But it was very scary."