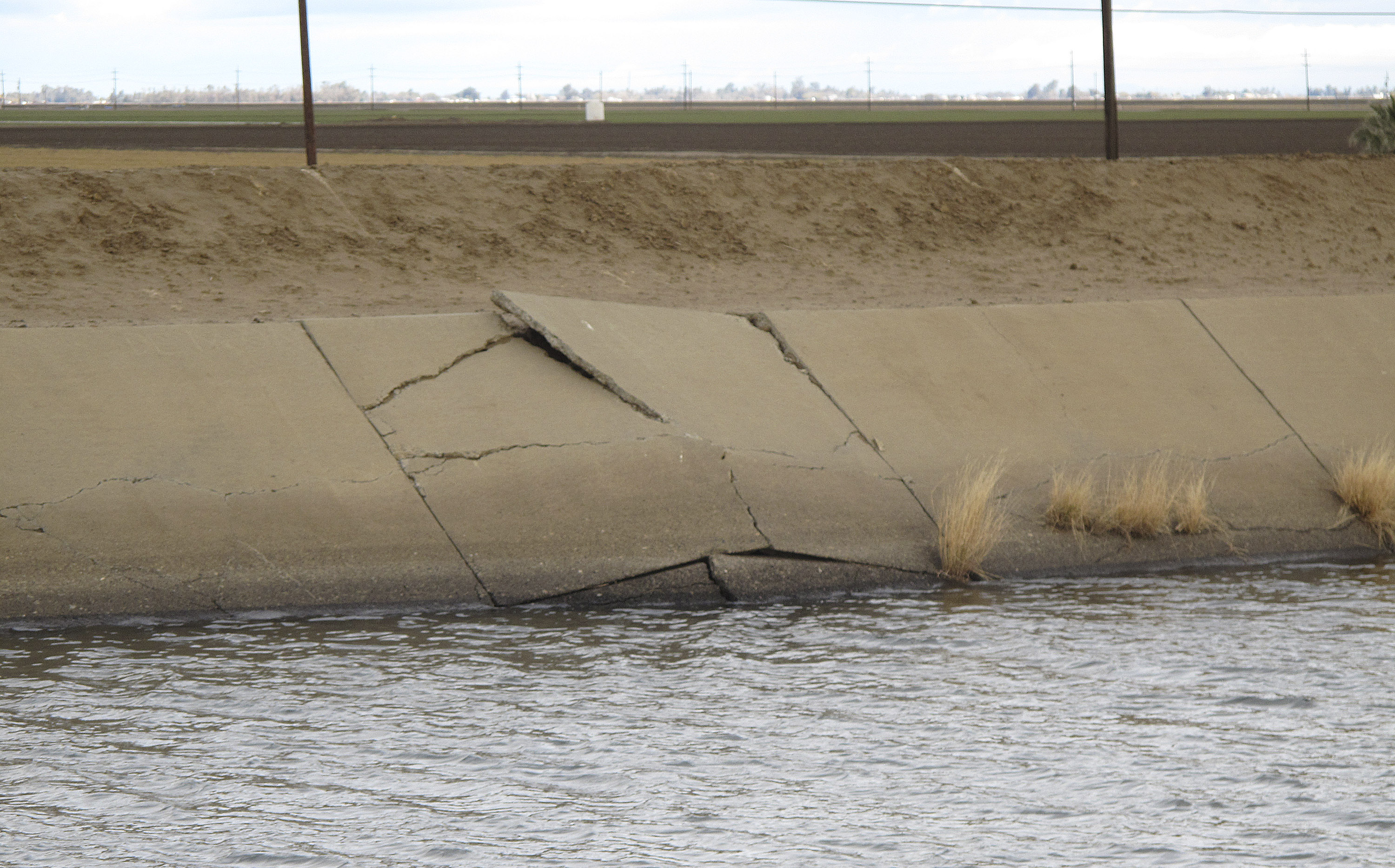 DOS PALOS, Calif. -- A canal that delivers vital water supplies from Northern California to Southern California is sinking in places. So are stretches of a riverbed undergoing historic restoration. On farms, well casings pop up like mushrooms as the ground around them drops.

Four years of drought and heavy reliance on pumping of groundwater have made the land sink faster than ever up and down the Central Valley, requiring repairs to infrastructure that experts say are costing billions of dollars.

This slow-motion land subsidence -- more than one foot a year in some places -- is not expected to stop anytime soon, experts say, nor will the expensive repairs.

"It's shocking how a huge area is affected, but how little you can tell with your eye," said James Borchers, a hydro-geologist, who studies subsidence and says careful monitoring is necessary to detect and address sinking before it can do major damage to costly infrastructure such as bridges and pipelines.

Land subsidence is largely the result of pumping water from the ground. As aquifers are depleted, the ground sags.

The most severe examples today are in San Joaquin Valley, where the U.S. Geological Survey in 1975 said half of the land is prone to sinking. USGS researchers later called it one of the "single largest alterations of the land surface attributed to humankind."

A sparse mountain snowpack in California's driest four-year span on record has forced farmers in the Central Valley, the nation's most productive agricultural region, to rely on groundwater to irrigate their crops.

Drought has spawned a well-drilling boom with some tapping ancient aquifers 3,000 feet down.

In wet years, groundwater provides about 40 percent of water used in California, but in times of drought, groundwater can amount to 65 percent of the state's water supply.

Decades of over-pumping have destroyed thousands of well casings and buckled canal linings. To keep water flowing through low spots, irrigation districts raise the sides of sagging canals so they can increase the water level and maintain a gravitational flow.

As a result, at least one bridge now sits below the waterline. Chris White, general manager of the Central California Irrigation District in Los Banos, said replacing it is expected to cost $2.5 million. Rebuilding another canal recently cost $4.5 million.

Putting a grand total on damage from subsidence in California is tricky because irrigation districts don't often single out repairs required by subsidence from general upkeep, said Borchers, who estimates long-term costs as being "probably in the billions."

Subsidence has been a problem for decades, and it's accelerating. Last year near Corcoran, the land sank 13 inches in eight months, researchers at NASA's Jet Propulsion Laboratory found by comparing images collected over time from satellites and airplanes.

This has cost the state of California "tens of millions of dollars" in repairs to the aqueduct in the last 40 years, and officials expect to spend that much in the future, said Ted Thomas, a spokesman for the state's Department of Water Resources.

California became the last state in the West to regulate groundwater when Gov. Jerry Brown last year signed legislation ending a Gold Rush-era policy that generally let property owners take as much as they wanted. But local agencies have until 2040 to put groundwater management plans into effect.

Farmers and irrigation districts are not the only ones taking note of sinking land. Spokesman Greg Snapper said Pacific Gas & Electric Co. has not sustained any broken natural gas pipelines from sinking land in the Central Valley, but it monitors the lines and this year started using NASA's satellite research as part of that effort.

A 60-mile stretch of California's High Speed Rail track, designed to whisk passengers through the Central Valley in excess of 200 mph, will be built on a bed of rocks. This design is more forgiving and easier to maintain and repair if the land sinks than other stretches built on highway-like slabs, said Frank Vacca, the rail authority's chief program manager.

Sinking land has stopped work on part of a historic project to return water flows to an irrigation-depleted section of the San Joaquin River. Before construction of a passageway for fish can begin, officials need to assess how fast the land will sink in the future, said Alicia Forsythe of the U.S. Bureau of Reclamation.

With a wet El Nino winter forecast, geologists also worry that subsidence in a flood control channel elsewhere on the river may cause water to pool, prompting flooding rather than flow toward the sea.

"We haven't had to use it for a while," said Michelle Sneed, a USGS subsidence researcher. "We'll see how that's going to perform this year, if it's called upon."

Last month, CBS Los Angeles reported on the Vasquez Canyon Road in Santa Clarita. The road had buckled, which caused deformation in just a couple of hours.

And while the road may look like a mess, it has left a group of UCLA geology students mystified.

Drivers started calling California Highway Patrol about the road coming up. It kept rising into a 200-foot stretch. That stretch grew by more than 15 feet in three days, stumping local engineers and geologists.

"When we think about geology, we think about processes that happen over millions and billions of years, so the opportunity to bring students out and see something happening over a scale of hours gives them the idea that not only does geology take forever, it can also happen almost instantaneously," Professor Boyce added to CBS LA.

"It's a completely different experience hearing about it in a class and then coming here and seeing it in real life, kind of watching it come to life," UCLA student Sarah Casey said.

"We can build all these buildings, but the earth does what it does, so it kind of puts into perspective our place in the world," UCLA student Brittany Miles added to CBS LA.