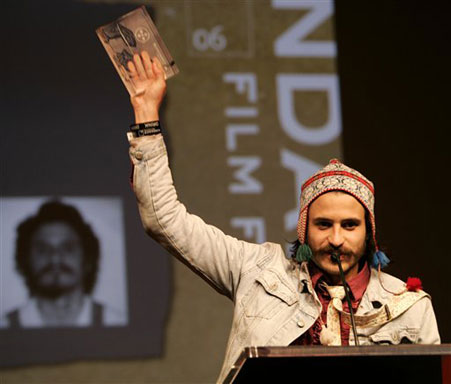 Before John Daly teed off in the second round of the Greater Vancouver Open on Friday, he thanked Corey Pavin and David Frost for their support after he burst into tears and began shaking during the opening round.

"It was definitely a tough day," Daly said Friday in a interview with TSN. "But what Corey and David did for helping me through it, ... I just can't thank them enough."

Daly, who is struggling through a difficult year with his play and an ongoing battle with alcoholism, began shaking terribly at the 15th hole Thursday. Looking distraught and haggard, he crossed his arms on his chest and walked around the green, tears coming down his face.

Both Pavin and Frost comforted Daly, who put on a second jacket to ward off a chill even though temperatures were in the mid-80s.

Daly finished with a 3-over-par 74 on Thursday but declined to speak with reporters. There were reports he would withdraw from the tournament.

Daly, winner of the 1991 PGA and 1995 British Open, looked collected when talking about the incident before Friday's round. He said a similar bout of shakes caused him to walk off the course at the 1997 U.S Open.

"I knew more what to do this time than there," he said. "It's part of the program.

"I've called everybody I know pretty much and they said `You're right where you're supposed to be. We know you're sober.'

"The first two years are very difficult in this program. It's the hardest part. The shakes are going to come and go and some are going to last longer than others."

Daly, 32, said he's overwhelmed from the support he's received from other professionals on the PGA Tour.

"All the players on the tour have showed me so much respect and it means an awful lot," he said. "No matter what happens we're all just one when it comes to life.

"I've learned so much from these guys."

After a decent start, Daly's year has gone downhill. In his last four tournaments, he has missed the cut three times and been disqualified after completing three rounds at the St. Jude Classic.

Earlier this month, he threatened not to play another PGA Tour event this year and refused to talk to reporters at the 36-hole Fred Meyer exhibition event in Portland, Ore. last weekend.