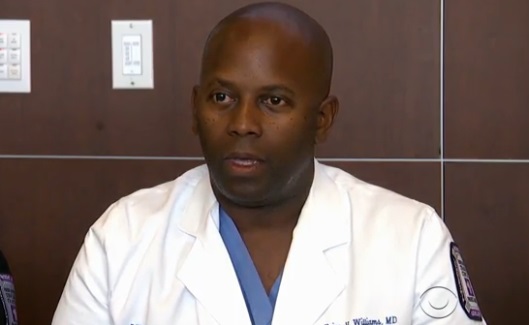 DALLAS -- On Monday, a trauma surgeon at Parkland Memorial Hospital in Texas spoke about trying to save the wounded officers in the Dallas shooting -- and about race in America.

Dr. Brian H. Williams, who is black, said he understands the "anger and frustration and distrust of law enforcement."

He went on to say that police are not the problem, but instead the lack of discussion about "the impact of race relations."

Williams and other doctors who treated some of the officers who were shot Thursday night in downtown Dallas held a news conference on Monday afternoon.

"And I think about it every day. That I was unable to save those cops when they came here that night," Williams said. "It weighs on my mind constantly. This killing. It has to stop. Black men dying and being forgotten. People retaliating against the people who were sworn to defend us. We have to come together and end all this."

Five officers died and nine officers and two civilians were injured during a protest over recent fatal shootings by police.

Williams said that he has a daughter, and he makes sure while in public, to do simple things for officers.

"When I see police officers eating out in a restaurant, I pick up their tab. I even one time a year or two ago, I bought one of the Dallas Police officers some ice cream when I was out with my daughter getting ice cream," he said. "I want my daughter to see me interacting with police this way so she doesn't grow up with the same burden that I carry when interacting with law enforcement."

Williams said he wants police officers to see him as a black man, and understand that he supports them.

"I will defend you and I will care for you," he said. "That doesn't mean that I do not fear you."

A self-described military brat who moved around a lot as a child, Williams turned to medicine after spending six years in the Air Force as an aeronautical engineer. He got his medical degree from the University of South Florida in 2001, did his residency at Harvard's Brigham and Women's Hospital in Boston, and a fellowship at Emory University's Grady Memorial Hospital in Atlanta before joining Parkland -- the same hospital where President John F. Kennedy was brought after he was shot -- six years ago. He's married with a 5-year-old daughter.

He's been stopped by police himself over the years and said he is mindful each time that he must act and speak in a way that doesn't seem threatening. He lives each time in fear that he could be killed. He sees the news about other black men killed by police.

In one traffic stop, he ended up "spread eagle" on the hood of the cruiser. In another, when he was stopped for speeding, he had to wait until a second officer arrived. Just a few years ago, he was stopped by an officer and questioned as he stood outside his apartment complex waiting for someone to pick him up and drive him to the airport.

He doesn't have such encounters every day but when he does, he's on his guard and, "I'm always just praying for the encounter to end."

As Friday morning turning into Friday night, the trauma unit's efforts came to an end. They had done all they could and it was time to bring the bodies of those they were unable to save to the medical examiner.

Police were lined up in the ambulance bay, the blue line in full force to escort and pay respects to their fallen colleagues. Williams joined the officers, standing with them in their formation.

"I didn't know if I belonged with them. I was a civilian. I don't go through the daily challenges that they go through. I don't put my life on the line every day like they did," Williams said, tearing up. "But I was grieving with them. I felt the same degree of sorrow. And I wanted to show my respects. ... I hope that what I did was not offensive to them. But I wanted to show my appreciation to them."

Through it all, Williams can't help but question why he was there that night. He wasn't supposed to be, except for a last-minute schedule change.

"I wonder if this was the reason that in the midst of all this racial tension and dead black men and violence against cops -- was I the one put there to experience this and tell my story and get the conversation started?" he said.