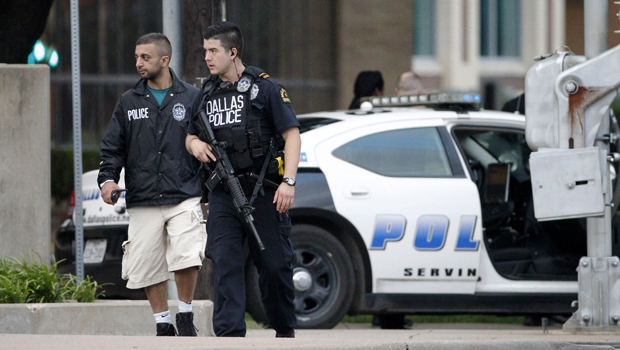 DALLAS -- A sniper shot a cornered suspect in an overnight attack on Dallas police headquarters, and authorities later confirmed that he had died, the police said Saturday.

The police sniper shot the man following a standoff of several hours in a restaurant parking lot in the suburb of Hutchins, where he had fled in a van after the early morning shootout outside of police headquarters near downtown Dallas, Chief David Brown said at a news conference.

On Twitter Saturday afternoon, the department confirmed that the suspect died in the van.

Investigators found a package containing pipe bombs near the headquarters building and the suspect told police negotiators that he had "C4" explosives in the van, Brown said. The chief said police were using a camera-equipped robot to inspect the van and to try to determine if the suspect was alive or dead.

Brown said investigators believe the man acted alone, even though early witness reports suggested there could have been as many as four attackers. Brown said the suspect apparently moved quickly during the attack, which may have given the impression that others were involved.

Cellphone video shot from a balcony or roof near the headquarters building showed the suspect's dark-colored van ram a squad car as gunshots ring out. Brown said shots struck several squad cars, but nobody except for the suspect was shot or injured during the hours-long confrontation.

In an earlier news conference, Brown said the suspect had identified himself as James Boulware and told police that he blamed them for losing custody of his son and "accused him of being a terrorist."

After announcing police had shot the suspect, Brown said investigators were still trying to confirm his identity, pointing out that the suspect could have been lying about his name earlier.

The name given by the suspect has been associated with three cases of domestic violence, CBS News correspondent Vicente Arenas reports from Dallas.

At the time of the shooting, Ladarrick Alexander and his fiancée, Laquita Davis, were driving back toward the police station to their nearby apartment when they heard 15 to 20 gunshots in quick succession.

Seconds later, police could be seen swarming an unmarked van that appeared to have crashed into a police car, they said.

They turned around and were parked outside the police perimeter about two blocks away, where they heard the sound of one detonation at about 4:30 a.m. and smoke coming up in the air.

Police headquarters is in a former warehouse district where a boutique hotel and several new apartment buildings have been opened.

"We don't see too much going around here at all," Alexander said.